It has been revealed that the new WhatsApp feature will automatically identify whether the link in a received message is redirecting to a fake website or not. As such fake websites could potentially harm users so, upon detection of a suspicious link, the message will be marked with a Red-coloured label. This will let users easily understand that such a site can potentially harm them. The screenshots posted by the WABetaInfo clearly reveals that WhatsApp will warn the users who will try to open the link with a message that reads:

“This link contains unusual characters. It may be trying to appear as another site.”

The warning message is shown over here. 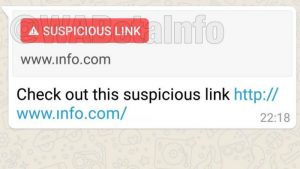 WABetaInfo team claims that WhatsApp is currently testing this new feature. According to their claim, we can expect its arrival for WhatsApp beta users in the future. It is also reported that the feature will also get an ability to let users manually report a suspicious link. WhatsApp also claimed that they will analyze the link locally so that users’ data will not have to compromise for the sake of detecting suspicious links. It is a much-needed feature to limit the spam circulation which will help a lot to address the fake content.