WhatsApp makes Android beta users tinker with different features. It also contains one valuable ‘Always Mute’ feature, a new Use UI for Storage and its resources, and another function called Media Guidelines. The instant messaging platform has released WhatsApp 2.20.201.10 beta for Android and it also has been discovered that video and voice call buttons for business accounts have disappeared.

The new features were enabled in the current update, but others might have a little more time.WABetaInfo has developed and spotted some new features in testing on the last WhatsApp 2.20.201.10 beta for Users. The most thrilling aspect is undoubtedly the ‘Always Mute’ feature, which effectively replaces the option ‘1 year’ previously usable while muting a chat. The new choice is self-explaining and allows users to mute a small number of groups of people forever.

In the new beta, we might see this feature. WABetaInfo mentions that it should be allowed within a few days if it is not automatically shown. A new Storage Use UI for beta users is also enabled with the upgrade. The tracker states that the roll-out started in the past beta, but the roll-up was slow and few people were updated. Now some users have been confirmed to get the feature with WhatsApp 2.20.201.10 Beta for Android. We haven’t had the upgrade yet, but it should be available in only a few days for all users. 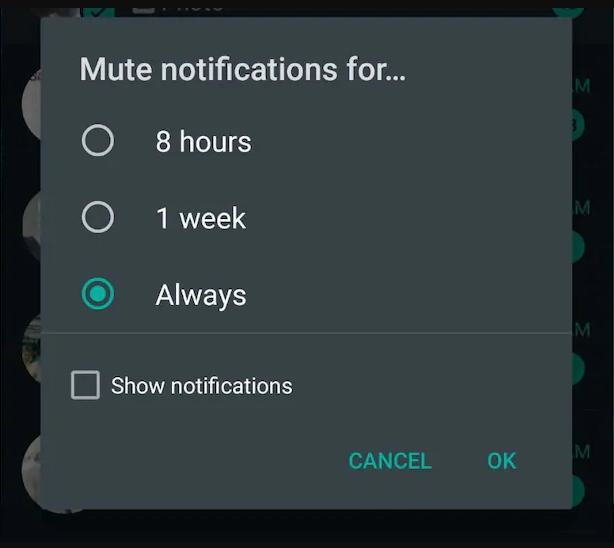 Furthermore, Media Guidelines is also being enabled for public beta testing. This functionality has been known to be ongoing for a while, enabling users to align text and stickers when editing photos, videos, and GIFs. This feature was not yet enabled for us, but it should be available shortly.

Eventually in chats with verified business accounts, the tracker finding that WhatsApp hides Voice and Video Call buttons. The buttons also seem to be removed from Contact Details. These keys are also usable if the chat and contact list profile key is pushed. WhatsApp is covering these chats, there is little clarification. It could only a test, and in future updates, WhatsApp could bring it back.