WhatsApp is testing a number of features on the Beta version before introducing them to everyone. WhatsApp has uncovered another “disappearing photos” feature that is expected to introduce soon. WaBetaInfo has shared the feature detail which indicates that a photo will disappear when the receiver opens it and leaves the chat window.

According to the WaBetaInfo shared photo, we can see a new icon in the media edit section on selecting an image for sharing. A “blue button” next to the textbox “Add Caption.” When you click on it, a pop-up message will appear stating, “This media will disappear, once you leave this chat”. 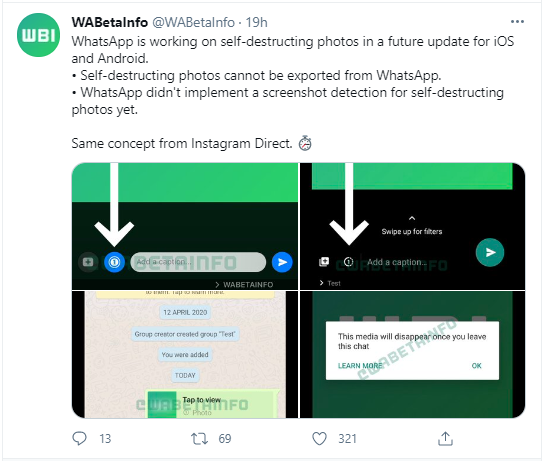 The screenshots suggest that you have to select pictures from the gallery to send as a disappearing photo. Once the image is selected, then the blue clock-like icon will need to be taped, which will display beside the “Add a caption” bar and then send the disappearing photo to a contact. (You can see a process in screenshots)

The latest photos disappearing feature is similar to Instagram’s self-destructing photo and video feature. When someone opens a disappearing picture or video again after leaving the chat on Instagram, the message will no longer available in their inbox except if you allowed the message to be replayed.

WaBetaInfo further stated that the self-destructing pictures of WhatsApp could not be forwarded or saved. In easier terms, a WhatsApp recipient would be unable to save the photo in the phone’s gallery or forward the disappearing photos to other friends. WaBetaInfo also confirmed that a screenshot detection for self-destruction images had not yet been implemented by WhatsApp. Still, the recipient can take screenshots of the disappearing photo when opens, and the sender won’t even receive any notification.

Whatsapp is currently working for both the iOS and Android versions. But there is no information on when the company will officially roll out this feature for all users.