According to the WABetainfo, WhatsApp’s version 2.21.21.7 for Android is currently operating in the beta stage. The latest ‘Manage Chat Backup’ button will allow users to determine how large they want their Google Drive backup to be. Furthermore, the new feature also allows users to determine the parts to back up, thus enabling them to remove heavy bits of data like videos, pictures, documents, etc. 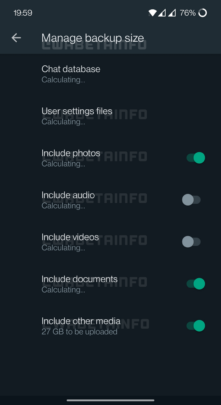 Lately, WhatsApp has launched a new feature that allows its 2 million user base to encrypt their chat history backup in iCloud or Google Drive. Consequently, the company has removed a major loophole that has been exploited by different entities to obtain and review personal communication between individuals.

A future version of WhatsApp will allow you set a limit on your backup size.

WhatsApp’ decision to test the feature is a good step as managing back up data will be prove to be really handy at times. Currently, WhatsApp backups do not allow you to count your storage quota against the Google Drive, but that could change in the near future. When this new feature will be out, any data over 2GB will be counted. So we expect this new feature to come out soon, as it will enable the users to conserve their precious storage.

As quoted earlier, the feature to manage your backup storage on WhatsApp for Android is still under testing. No exact date has been announced yet for regular users. However, we can expect it to be introduced on Android and iOS together, as the feature can prove handy to Apple users as well.
Check out? WhatsApp Users will Not Get Unlimited Backups on Google Drive
Usama AnjumLast Updated: Oct 15, 2021
Share
Facebook Twitter Pinterest