Lahore: – August 10 2015 First revealed in MWC 2015, Huawei Media Pad T1 7.0 is a power packed device. This tablet come mobile phone has been quite well received in the Pakistan technology market. This smart device has undoubtedly taken the phablet devices to the next level because of its ultra amazing features and apps.

The colorful and bright display of Media Pad is a 7 inches IPS screen, which has a resolution of 600×1024 pixels, wide viewing angles. The phablet’s façade has been tailored with the smooth transition TOD technology, because of which the display area and the TP frame are fused together, which gives the feel of a quite bigger screen. The front and the rear camera, both are 2 MP; the rear cam is with fixed focus and flash.

Media Pad T1 7 is enclosed in a solid metal body that is resistant to scratches and impacts, moisture and dust. Among numerous amazing features Media Pad has been manufactured with the OTG reverse charging the innovative reverse charging function so that your device is always on.

Huawei has incorporated a built-in battery capacity of 4100 mAh which on a single charge provides up to 300 hours in standby mode up to 12 hours of video and up to 8 hours Internet surfing through strong and fast 3G/Wi-Fi connection. With Huawei’s Smart power2.0 features, this phablets keeps a strict control on the battery usage . 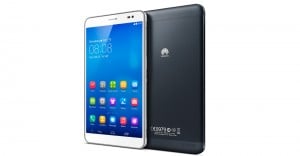