Perhaps you were playing Wordle this afternoon and came across a relatively common five-letter term. However, if you haven’t refreshed your page during the last week, you may have come across the solution “FETUS,” which the New York Times decided was a little too close to the latest events. Last week, Politico spilled a Supreme Court opinion draught poised to invalidate Roe v. Wade, overturning the constitutional right to abortion.

The New York Times updated today’s answer to a less politically charged term, though users who haven’t restarted the game may still see the previous solution.

“Some users may encounter an outdated response that appears to be linked to a major latest news event. In a statement released just as today’s Wordle went up, New York Times Games editorial director Everdeen Mason said, “This is entirely inadvertent and a coincidence.”

According to Mason, Wordle’s solutions are predefined in their coding and are drawn from a pool of five-letter words devised by founder Josh Wardle over a year ago. Not all five-letter words are included in the list; he purposefully left out the most obscure five-letter words since he intended the game to be solvable most often (you’ll also rarely come across a four-letter noun with an extra “S” to make it plural). 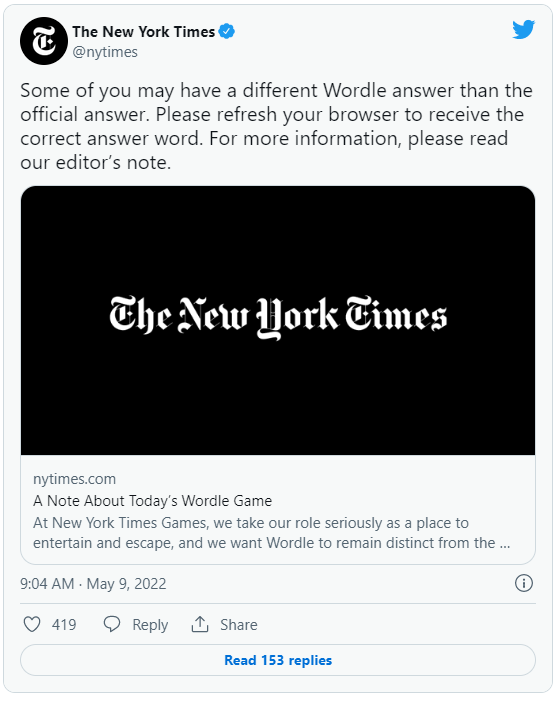 “Wordle had been designed for a relatively modest set of people when we acquired it in January,” Mason explained. “We’re currently working on updating Wordle’s technology so that everyone gets the same word.”

There were a few times since Wordle entered the New York Times Games where Wordle had two alternative solutions. This most recently occurred at the end of March on the option of “STOVE” or “HARRY” as an answer.

This occurred because New York Times removed some of the odd terms from the solution bank. However, when Wordle moved from Wardle’s website to the New York Times, many users continued to utilize the original Wordle rather than the slightly changed New York Times version.

According to the New York Times, “tens of millions” of people play Wordle every day. The firm said it achieved its best quarter ever for user growth in its subscription-based Games area, thanks to its “low seven figures” acquisition of the wonderfully simple game.

Also read: Fan Remake of Need for Speed Underground 2 is a Look-Alike of the Official Game