International Data Corporation (IDC) again confirmed today that the worldwide smartphone market will continue to see its overall growth slow in 2015. The firm further confirmed that global smartphone shipments will grow just 11.3% in 2015, down from 27.6% of 2014. This change is considered because of the saturation of Chinese smartphone market; which will make 2015 the first year that China’s smartphone growth (2.5%) will be slower than the worldwide market.

According to IDC, this slowdown of Chinese market will impact whole Android growth, as the Google-developed mobile platform is also expected to see slower growth than the worldwide market at 8.5% in 2015.

The figures are in line with smartphone shipment IDC reports that were released in the first quarter of 2015, which had predicted 11.8% worldwide smartphone growth in 2015.

China’s smartphone market is still the largest in the world, but it is not showing further growth. Last month, it was reported by IDC that smartphone shipments in China had decreased for the first time in 9 years. During Q1 2015, 98.8 million smartphones shipped, down 4% year-over-year, and 8% on the previous quarter.

[pull_quote_center]“This has implications for Android because China has been a critical market for Android smartphone shipments in recent years, accounting for 36 percent of total volume in 2014,” he says. “As Chinese OEMs shift their focus from the domestic market to the next high-growth markets, they will face a number of challenges, including competition from ‘local’ brands.”[/pull_quote_center] 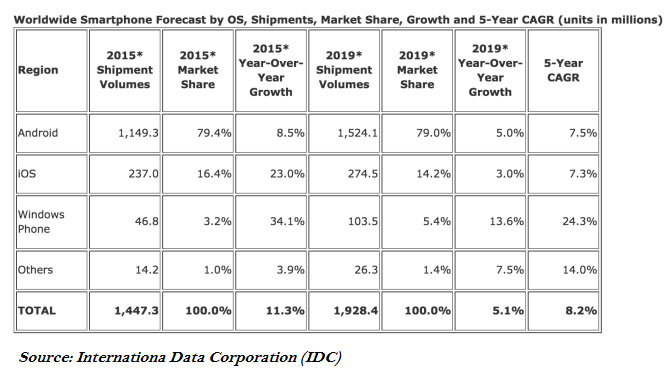 China, which is now an “emerging” market, is actually similar to other more mature and already emerged markets like the U.S., U.K, Australia and Japan and it has potential to further improve its growth in coming years.