According to the International Data Corporation (IDC), phone companies shipped a total of 347.4 million smartphones worldwide in the first quarter of 2017. As compared to last year report, there is 4.3% increase in Worldwide Smartphone Shipments. As always, Samsung and Apple maintained their leadership in the smartphone market this year too. 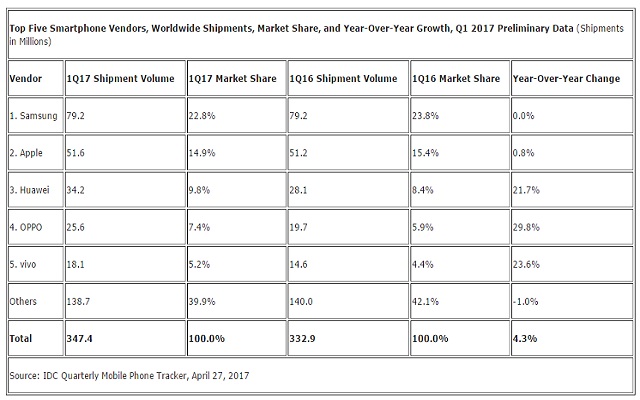 “The first quarter smartphone results further prove that the smartphone industry is not dead and that growth still exists,”

“There is no question that 2016 was a pivotal year for the industry as growth dipped to low single digits for the first time. However, we believe the industry will show some rebound in 2017, and the strong first quarter results certainly support this argument. In addition to what shipped in 1Q17, big flagship announcements from Huawei with the P10 devices and Samsung with the Galaxy S8 devices show that innovation is still possible. And despite any formal announcements from Apple it is safe to say the industry is highly anticipating what comes from this year’s iPhone announcements.”