Among them Huawei is leading with 9% market share. Oppo and Vivo have 8.1% and 6.8% market shares respectively.

“Furthermore, aggressive marketing and sales promotion have further helped these brands to take share from other brands in markets such as India, Indonesia and Thailand.” 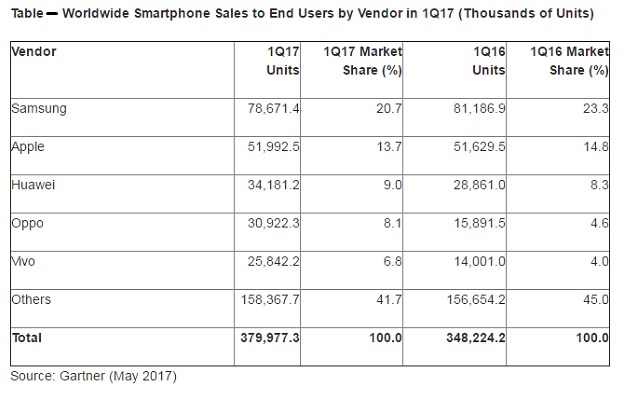 Oppo is continuing to catch up with Huawei. With a 94.6 percent increase in worldwide smartphone sales in the first quarter of 2017. Oppo has also achieved the best performance of the quarter and retained the No. 1 position in China.

Samsung’s smartphone sales declined 3.1 percent in the first quarter of 2017.

“Although Samsung announced that preorders for the Galaxy S8 and S8 Plus are up 30 percent year over year, the absence of an alternative to Note 7 and the fierce competition in the basic smartphone segment are leading Samsung to continuously lose market share,”

“Sales of iPhones were flat, which led to a drop in market share year over year. Similar to Samsung, Apple is increasingly facing fierce competition from Chinese brands Oppo and Vivo, among others, and its performance in China is under attack.”