The English language is becoming smart and concise with the passage of time. Now, short forms of phrases and new slangs are becoming part of day-to-day speech. With the penetration of technology, chats in text messages and in other platforms have increased to a great deal. Most of these smart acronyms are being used in such conversations. Like, Sup which means ‘What is up.’ There are a number of such acronyms but in this article, we are concerned with WYO meaning in a text on an online platform like Snapchat or as part of an Instant Message. If you are not familiar with this term, then you must be thinking what does WYO mean? So we are going to tell you about the WYO meaning in Text & Snapchat and what is its abbreviation.

What does WYO mean?

WYO stands for ‘What you on.’ It can be regarded as an acronym or a phrase used by people to ask each other regarding their plans and if those people would be up for company during that particular time. Generally, WYO is frequently used among buddies or friends to talk about plans and is particularly sent to you by your friends if you are on a vacation or leave from your work.

Where is WYO used

You can use the WYO in the following circumstances:

If you know about acronyms then you might have seen that WYO is quite the same as WYD. Mostly these two are used in the same situations as WYD and only differ in the fact that it is often used to make new plans rather than catching up with a friend on text.

What are the Origins of WYO?

The exact origins of the acronym WYO can’t be traced, however, its wide use was started back in 2015 with the rapid growth of technology and people chatting more via text messages and social media. Later, the acronym was formally accepted as slang and it was incorporated into the Urban Dictionary’s website in 2017.

Some Synonyms of the WYO:

There are a number of synonyms that can be used instead of WYO. A few examples include “Sup” “What’s up?”, “whassup”, “whaddyup”, “How are you?”, How’s it going? “, What’s happening?” and ‘How’s it Hanging?”. The users can decide when to use WYO or when to use other synonyms on the basis of the form of communication. WYO is one of the smartest ways to get straight to the point, however, it is only appropriate in particular situations.

Some other acronyms similar to WYO

Some other acronyms that are widely used in daily conversations are as follows:

The term WYD stands for ‘What’re you doing.’ It is a smart way to ask people what they are doing during a conversation. Furthermore, there are specific stickers and cameos for this phrase on Snapchat and other social media platforms that you can use instead of a particular term.

The acronym LMK stands for ‘Let me Know.’ This phrase is widely used for asking for updates about something or finish of conversations after you asked something. Generally, it is being used in casual deals where you would be eager to know about something.

The term DYK stands for ‘Did you know.’ The acronym is used in a way to share facts or some other breaking news with your friends. Furthermore, it can also be used to share some hot gossips or just inform them about new happenings that might be important to a specific friend.

How to send WYO on Snapchat other than Text Messages?

WYO can be used in a number of ways on Snapchat. Let’s take a look at some of the most common ones. 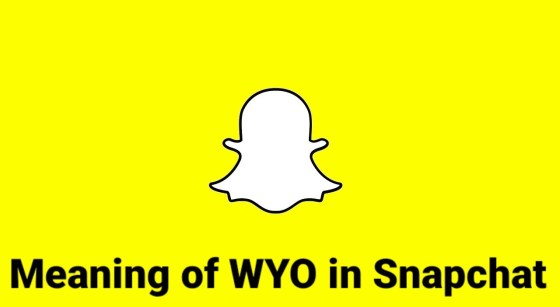 Snapchat has introduced new features where the user’s face gets superimposed on multiple animations to make it seem that you are doing outrageous actions. These are called cameos. You can use Cameos to send a WYO to your friends. You just need to type WYO in the text field and click on the ‘Cameo’ icon to your right. Afterward, choose the cameo that you find relevant and send it to the specific contact.

A Few other Slangs used in Snapchat:

MK stands for ‘Mm ok’. It is another way of saying yes to a statement or agreeing with someone.

ICYMI stands for ‘I see You Missed It.  It is a slang used to let a friend know if they missed some event or a snap.

FYI stand for ’For Your Information.’ This slang lets the other person know that you are going to tell them something really important.

We hope that now you all have understood the WYO meaning and how it is used. If you like our article or have any queries regarding it, do mention them in the comment section!

Check out? What Does a Grey Arrow Mean on Snapchat?