Xiaomi has eliminated its brand name “Mi” from its devices, so the next flagship, named Xiaomi 12 in replacement of Mi 12. Upcoming Xiaomi 12 is expected to come with excellent camera capacity, look here for more details.

Xiaomi was the first to jump for 108MP flagship smartphone camera technologies, which has been followed by a lot of other companies. The Chinese company is now moving back a step and working on the Xiaomi 12 with a 50MP primary camera. The Xiaomi 12 can have three 50-megapixel basic cameras; 50-megapixel primary, 50-megapixel ultra-wide lens, and a 50-megapixel telephoto camera, Popular Chinese tipster Digital Chat Station has revealed these details. 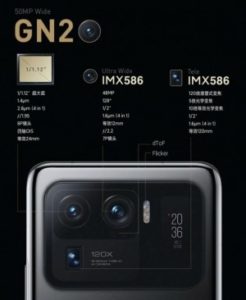 Xiaomi claims that a 5x periscope zoom will be available for the 50MP camera, will give better zoom quality range without losing details. The company has probably been working on a 10x zoom previously, which was less realistic since 5x can be combined with a smoother zoom and a better resolution.

Earlier rumors indicated the Xiaomi 12 series will have a 200MP Samsung sensor, but probably for the Xiaomi 12 Ultra. Nevertheless, the firm is still in the design test stage, so that the final hardware might be different as remoured.

The LTPO AMOLED screen, which has a variable refreshing rate from 1 to 120Hz, will also include, as per leaked reports. The phone is expected to arrive at some line at the end of the year. The latest flagship Qualcomm chip announced this year will probably power the phone.