Xiaomi launched three flagship phones in May ie; Vanilla Mi 8, Mi 8 SE which is a lite version and the powerhouse variant with a translated name Mi 8 Explorer. The first two went on sale in June but the third device is yet to be launched globally. Last week it showed up on TENAA. Finally, Xiaomi Mi 8 Explorer Launch date is confirmed. 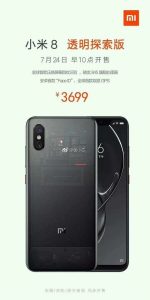 However, this image is not provided by the official Xiaomi communication channels so we can not comment whether it is authentic or not. However, 95% of the times rumours are authentic. If the date is real, Xiaomi Mi 8 Explorer will arrive on July 24 with under display scanner, 3D Face Unlock, Dual GPS and nice transparent back panel.

Mi 8 Explorer has 8 GB RAM and 128 GB storage. It is encased with two 12 MP cameras and a 20 MP selfie snapper. The battery of the phone is 3,000 mAh and is charged with a USB-C that is also used for sound output as Xiaomi excluded the 3.5 mm audio jack from its Mi flagships in 2017.

Mi 8 Explorer is not the only device that will launch on 24 July. Xiaomi Mi A2 will also launch along with Mi 8 explorer.  This announcement has come on the Mi forums, and Xiaomi is giving an opportunity to few fans to join the event. To attend the event, one can enter their info between July 11 and July 18.