Xiaomi has announced three flagship phones in May this year. The Mi 8 SE which is a lite version and the powerhouse variant with a translated name Mi 8 Explorer and Vanilla Mi 8 has been already launched while the third device is yet to be launched. In some of the previous reports, it was rumored that the Mi 8 Explorer will start selling on July 24. Recently, another leaked image showed off. According to that the Xiaomi Mi 8 Explorer launch date is decided to be July 30.

The leaked image has unveiled all the details regarding the phone. It shows the launch date, price as well as timings of its launch. Let’s have a look at that image. 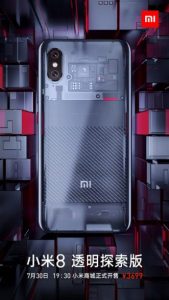 According to the leak, Xiaomi will start selling its Mi 8 Explorer on July 30 at 19:30 local Chinese time for CNY 3,699 or Pkr 67000. The price of the smartphone is actually less than the initially announced cost.

Mi 8 Explorer has 8 GB RAM and 128 GB of storage. It is encased with two 12 MP cameras and a 20 MP selfie snapper. The battery of the phone is 3,000 mAh and is charged with a USB-C that is also used for sound output as Xiaomi excluded the 3.5 mm audio jack from its Mi flagships in 2017. It will have display scanner, 3D Face Unlock, Dual GPS and nice transparent back panel. Rumors have also unveiled that 4GB/64GB and 6GB/128GB models will also be available very soon.