The Chinese tech giant, Xiaomi officially announced that Mi 8 will launch on May 31, 2018. As we already told, Xiaomi Mi 8 is the company’s 8th-anniversary phone and will come with premium features. Just before the launch, Xiaomi Mi 8 Price, Specification & Live Images leaked. The best thing is that Xiaomi Mi 8 will feature 3D face scanning, latest Snapdragon, and in-display sensor.

The leaked live images of Xiaomi Mi 8 reveals all the design details. Image shows that the back of the smartphone has a transparent glass panel that shows the internals and vertical dual camera on the top left side. 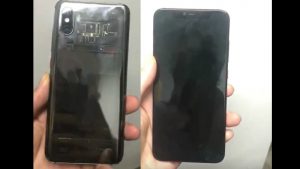 Xiaomi Mi 8 has a notch display at the front accompanies with the volume button on the right edge. As there is no logo on either side of the device so we would recommend you to wait for another authenticated leak. Just in a week, all the detail of the device will be revealed. Images above show the leaked specifications of flagship Xiaomi Mi 8. 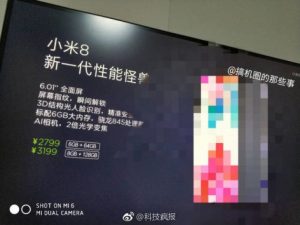