As we have already told you that Xiaomi is planning to launch three devices on May 31st. Xiaomi has confirmed that the company will launch Mi 8 in that event. Alongside that smartphone the company will also launch one smartphone that is Mi 8 SE. Now before the launch, Xiaomi Mi 8 SE Specs revealed. Lets check out rumored specs of the phone.

Xiaomi Mi 8 SE will feature Qualcomm’s new Snapdragon 710. Furthermore, it will also come with 4GB or 6GB of RAM. The phone will also include 64 GB of internal storage. Moreover, the phone will have Android 8.1 Oreo with MIUI 10 on top.

The new Xiaomi Mi 8 SE renders reveal that its design is so similar to that of the latest Mi Mix flagship that the only major differences are the inclusion of a display notch and a reduction in the chin size. Furthermore, the phone will have a 20-megapixel selfie camera alongside an LED flash. Over on the rear, the design will resemble both the Mi Mix 2S and the Mi 8. 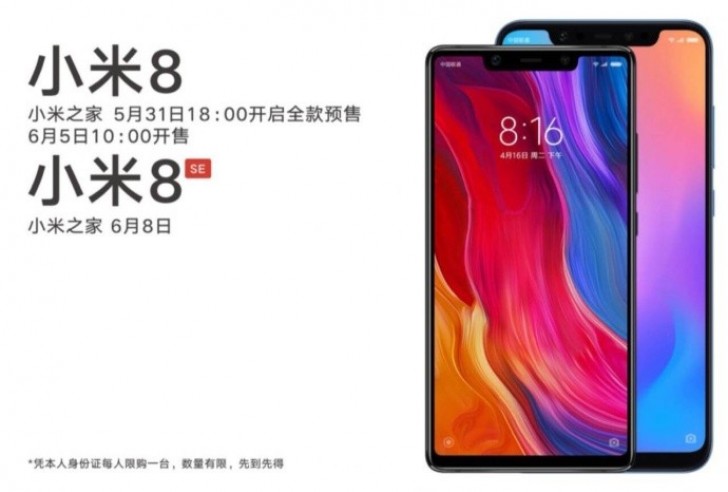 As per the Xiaomi Mi 8 specs are concerned. Xiaomi Mi 8 will come with Qualcomm’s Snapdragon 845. Furthermore, it will come either with 6GB or 8GB of RAM. However, it will have a built-in storage of 128GB. On the software side of things, Android 8.1 Oreo will ship straight out of the box with the MIUI 10 on top.

Xiaomi Mi 8 has a notch display at the front accompanies with the volume button on the right edge. The back of the smartphone has a transparent glass panel that shows the internals and vertical dual camera on the top left side. Moreover, it will contain USB Type-C cable – of course, it does – and a “USB-C to Audio” dongle.

Also Check: Xiaomi Mi Band 3 to be Unveiled Alongside Mi 8 on May 31