We all know that this month of February is all packed with launch events. Most of the smartphone makers are all set to unveil their new handsets at MWC19. Xiaomi is also prepping to launch its upcoming handset, Mi 9 on Feb 20. Recently, Xiaomi Mi 9 Camera Specs got leaked revealing all details about the camera of the upcoming smartphone.

We all know that the Mi 9 will launch with a triple camera setup. Recently, the company’s own CEO, Lei Jun shared the details about the Camera of the handset on Weibo. According to the Weibo post by the top executive, the phone will come with a four-lens function even though it has just three cameras. The most interesting thing is that the phone will be able to shoot macro, super-wide angle, portrait, and standard photos. Isn’t it amazing?? 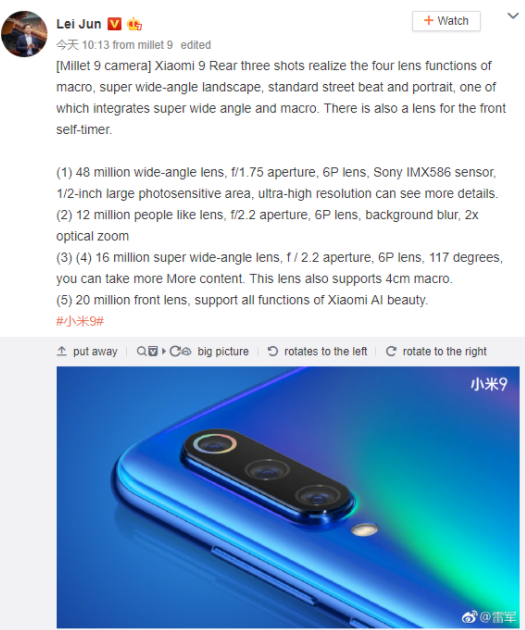 The primary camera of the handset will be a 48MP Sony IMX586 wide-angle sensor with an f/1.75 aperture and 6P lens. In addition to that, this main sensor will have a large 1/2-inch photosensitive area. Furthermore, this sensor will be able to take high-resolution photos. On the other hand, the second camera will be a 12MP f/2.2 sensor with 2x optical zoom and a 6P lens. It will provide background blur effect for your portrait images. Last but not least the third camera will be a 16MP super-wide angle sensor with an f/2.2 aperture and a 117° viewing angle. It will allow you to take macro shots.