Finally, Xiaomi has officially confirmed that the Mi CC9 Pro will give its first glance on November 5. The company has also revealed that alongside the smartphone, it will launch some more products. A few months ago, the company introduced the Mi CC9 series, under the series, we got to see the two models Mi CC9 and Mi CC9e. Now, the company has announced the launch of the Xiaomi Mi CC9 Pro in Beijing.

The mobile manufacturing company has also revealed the key highlight of the Mi CC9 Pro smartphone. It has been reported that the upcoming smartphone will have five cameras. The main rear camera will come with a 108MP. It will be the first device by the Xiaomi that is using a 108MP camera sensor. 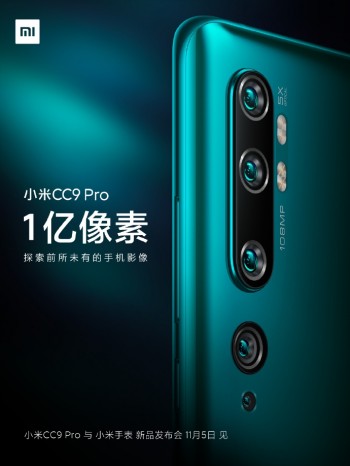 The Mi CC9 Pro is going to use the Samsung 108MP camera sensor because currently, this is the only one available in the market. According to the previous reports, Xiaomi is working on almost four smartphones with a 108MP camera. But right now we have the information about only one device and this is, of course, the Mi CC9 Pro.
The cameras at the back will be arranged vertically, two dual-LED flashes are placed next to them.
Recommended Reading: Xiaomi Redmi Note 8T Live Images Surfaced Online
Zainab SaeedLast Updated: Oct 28, 2019
Share
Facebook Twitter Pinterest