The upcoming Xiaomi Mi Max 3 with its entire specifications was spotted on TENAA. The listing had sowed that it has an octa-core processor that clocks at 1.8 GHz. Some rumors have claimed that it may come with the Snapdragon 636 that also powers the Redmi Note 5 Prohandset.

Moreover, it has been reported that the Mi Max 3 Pro will have a 6.9-inch display. The Snapdragon 710 SoC will be assisted by 6 GB of RAM. The handset will come with an inbuilt storage of 128 GB. The leaks suggested that Xiaomi Mi Max 3 receives power from a behemoth battery of 5,400mAh capacity. 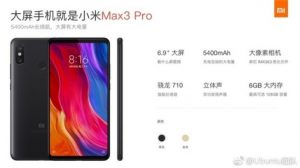 From the above image of the phone we can see that the Xiaomi Mi Max Pro 3 will be arrive with a vertical dual camera setup. It will feature Sony IMX363 as the primary sensor. Xiaomi Mi Max 3 Pro is also equipped with stereo speakers. The color variants of the Mi Max 3 Pro are Black and Gold. A fingerprint scanner can be seen with the vertical dual camera setup on the back of the smartphone.