We all know that a few days back, the company’s president, Lin Bin posted a render of the unannounced Mi Mix 3 and said that we will try to bring the smartphone to the market by the end of October. He also confirmed that Xiaomi Mi Mix 3 launch date will be announced soon. Most of the specs of the upcoming handset have already been leaked. Recently, a new leak showed up. It suggests that the upcoming smartphone, Xiaomi Mi Mix 3 will have an AI-dedicated button on the side.

We all know that having a dedicated key for the AI assistant is not new. LG has one for the Google Assistant while Samsung has it for Bixby. Even though, Xiao AI came preloaded on the Mi Mix 2S which is widely available in China only. The service opens with one press of the dedicated button. However, the new user interface will allow you to remap the double press action of the key. 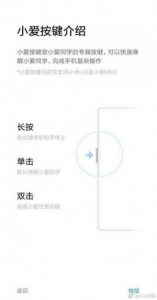 Mi Mix 3 will be the high-end flagship phone with a bezel-less screen. The biggest change in the Mi Mix 3 will be its design. The device will have very thin bezels on the sides and at the bottom. Mi Mix 3 is expected to launch with a Qualcomm Snapdragon 845 processor.

For selfies, the handset will have a 20-megapixel pop-up front camera. Reportedly, an in-display fingerprint scanner will be also present on the Mi Mix 3. The smartphone will carry support for Qi wireless charging according to some previous leaks.

We are not sure about these specs as there are still no words about the upcoming smartphone by the company. The phone is expected to launch in October. We can hope that the Xiaomi lovers don’t have to wait too long to know more about the phone.