We all know that Xiaomi is all set to launch their gaming handset, Xiaomi Mi Play on December 24. There had been a lot of leaks and rumors about this gaming smartphone for many weeks. Recently, we got our hands on some leaked slides that unveiled the specs and price of the upcoming handset.

Xiaomi Mi Play Will Be Powered By  MediaTek Flagship Chipset

According to the leaked slides, Mi Play will be powered by MediaTek’s annual flagship chipset. The handset will feature 6 GB of RAM. In addition to that, the upcoming gaming phone will come in two storage editions that will be 64 GB and 128 GB. The upcoming handset will feature a 5.84-inch display. Furthermore, the screen will sport a waterdrop notch. There will be 3,000mAh battery to keep the lights on. Moreover, the leaked slide also claims that the gaming phone will be available with free internet access for the entire year. Xiaomi Mi Play price is set to be 1,699 Yuan in China. In addition to all this, by paying 99 Yuan, its users can avail accident insurance of 12 months. Let’s have a look at the leaked slides. 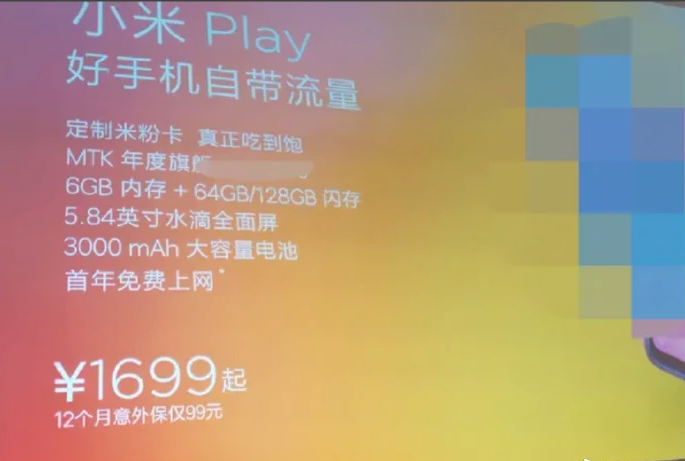 According to previous reports, Xiaomi will release this handset with an unlimited data plan with free 10 GB Data Per month. In this way, the handset will allow mobile gamers to enjoy the device without being bothered by connectivity. Furthermore, the upcoming gaming smartphone will feature a 12MP+ 5MP main camera set up on the rear with a depth-sensing second camera. On the other hand, there will be an 8MP selfie shooter. The phone will be AI equipped. Furthermore, Upcoming Xiaomi Play Color Options include the Black, Dream Blue, and Dawn Gold. The phone may feature MediaTek’s Helio P90 Chipset that includes two Cortex A75 cores working at 2.2 GHz and six Cortex A55 clocking at 2 GHz. The SoC will also include  PowerVR GM 9446 graphics together with support for Google AR Core. Only one day is left in its launch so Let’s just wait and watch.