Xiaomi Pocophone F1 was launched back in August 2018. At the time of launch, the phone came with  Android Oreo OS straight out of the box. However, after that, it was updated with Android Q. Recently, the phone got another update. The Xiaomi Pocophone F1 Update has brought Night Mode and 960 fps Mode.

Pocophone F1 has recently received a new MIUI 10 stable update. The update was long-awaited. The latest update also includes the security patch for the month of December.   The latest update is an OTA update and weighs 311 MB. It has brought two important improvements to the camera. The first feature that came with this update is the Night Mode. Night Mode will reduce the amount of digital noise in the dark. Furthermore, it will also improve the exposition by combining 8 photos with different exposure levels. In addition to that, 960 fps super slow motion video recording feature also came with this update. Furthermore, the 4K video recording at 60 fps will roll out to users in February. 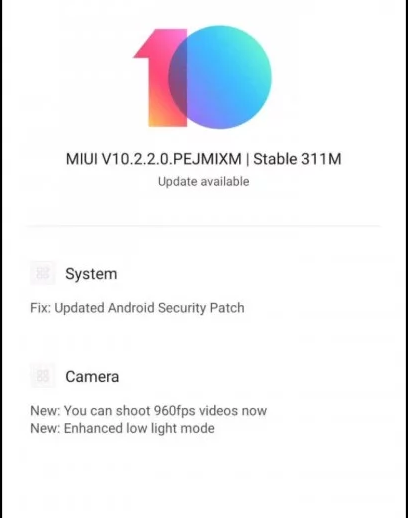 The Xiaomi Pocophone F1 features 6.0 inches’ screen that supports 2246 x 1080 pixels. The system of the phone has an octa-core processor. In addition to that, it has a ROM of 64GB and RAM of 6GB. Pocophone F1  is packed with a dual camera lens of 12MP & 5MP whereas the selfie camera has a 20MP lens. All the Xiaomi Pocophone F1 specs are up to the mark. Furthermore, the powerhouse has a fixed battery of 4000 mAh. Pocophone F1 is a gaming phone that lets you enjoy gaming at high frame rates. The phone features Snapdragon 845 and supports up to 8 gigs of RAM. It has also liquid cooling capability with big copper pipe for sustain performance. This is the reason that heavy gaming is not a problem at all.