There had been a lot of leaks and rumors about Xiaomi’s first Android Go handset for many weeks. Xiaomi lovers had been anxiously waiting for this Android Go Phone. However, the wait is over now as the phone went official earlier today.

According to the latest reports, the phone features a 5″ LCD display. The handset is powered by the  Qualcomm Snapdragon 425 coupled with four Cortex-A53 cores running at 1.4GHz.  Furthermore, it comes with 1 GB of RAM and 8 GB of onboard storage. However, it seems good for a low-end Android phone. The Android Go smartphone is specially designed for customers who can’t afford expensive devices or can’t spend much money on a new smartphone. A huge battery of 3000mAh will keep the lights on. Together with that, the smartphone will sport an 8MP rear camera and a 5 MP selfie Snapper. 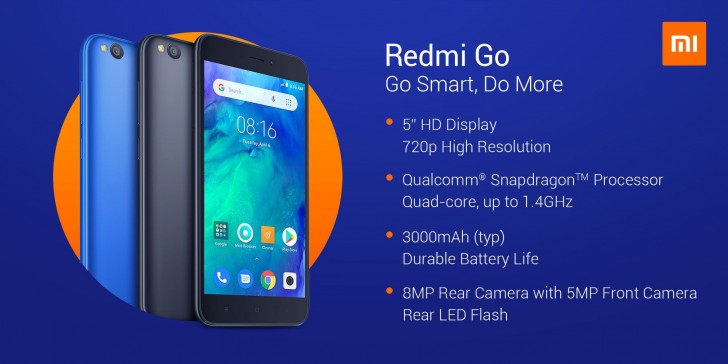 In addition to that, the smartphone comes with Android 8.1 Oreo Go edition straight out of the box. Moreover, the Redmi Go actually employs a hybrid slot. It lets you choose between extra storage and dual SIM support. However, you can’t have both. The Redmi Go Color Options Include Black and Blue. The phone will be heading to Europe and the Philippines in February. The Xiaomi Redmi Go Price is €80 in Europe. However, the Philipines pricing is yet to be confirmed. There had been no words about its availability in other markets yet.