This is now what we can call, A Direct Hit! Xiaomi has sent out regards to OnePlus and congratulates them for the launch of new OnePlus 7 Pro. Not only this, but Xiaomi has also called its upcoming device a Flagship Killer 2.0 which means it Aims to Face OnePlus 7 Pro with its Next Redmi K20. Let’s have a Look at the regards first. 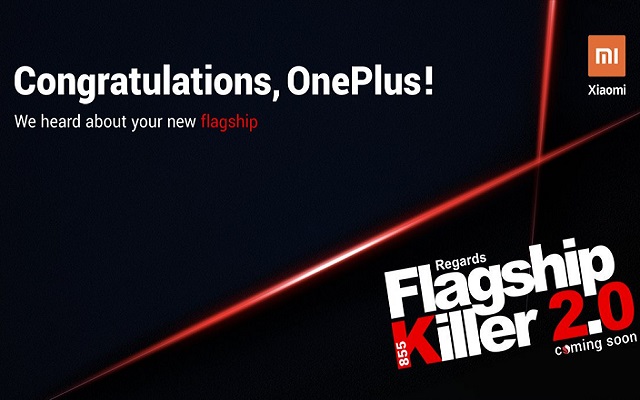 Xiaomi Redmi K20 will Feature Snapdragon 855 and a 48MP camera

The self-proclaimed Flagship Killer 2.0 will feature the Snapdragon 855 and a 48MP camera. We also got to learn that the internal name of the device is the “Demon King”.

Xiaomi’s VP Manu Jain congratulated OnePlus on the launch of their new OnePlus 7 Pro flagship and went further on to explain how the “flagship killer” mentality associated with OnePlus devices has all but disappeared, leaving Redmi to take its place.

They are choosing to “Never Settle” when it comes to pricing. At Xiaomi, we’ve believed in making innovation accessible to everyone by developing such Flagship Killers. As you will see again soon. – Manu Jain

OnePlus has launched 7 Pro yesterday. This is the first smartphone that came with the triple camera set up and with the Wrap charge obviously. Both are the amazing features of the phone. Other specs of the phone are also incredible. But the cost of the phone is also high. Let’s see what actually the Xiaomi will cost for its upcoming phone.