The Xiaomi Redmi Note 10S is the Chinese manufacturer’s valuable phone, which was released this year. It’s been sold in three shades, now company refreshed the phone and introduce a new space-themed version.

The Xiaomi Redmi Note 10-S is going to be available in Starlight’s purple shade in addition to Onyx Gray, Pebble White, and Ocean Blue colors. The backplate is finished in purple, with a galaxy-style theme. Firstly, the new version will be launched in Europe and later it will debut in Asia including Pakistan.

The MediaTek Helio G95 and a 5000 mAh battery are the main features of the Note 10S specifications. Only in 30 minutes, 33W Flash charge can charge the phone up to 55 percent. You will get fast UFS 2.2 storage in 128GB and 64GB versions. Moreover, it works for multitasking memory with 8GB/6GB.

A SuperAMOLED 6.43″ panel is included with a punch hole and a sharp 1080P resolution in the new 2021 Xiaomi phone version. This high-end screen has a good contrast ratio, a maximum of 1100 nits, and supports the color range of the DCI-P3. Xiaomi has incorporated 360° ambient light sensors to alter the luminosity of the Redmi Note 10S. It is also eye comfort certified SGS. 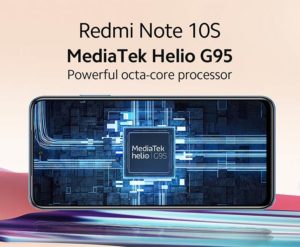