Xiaomi has revealed that the company is going to announce something new and innovative which would be “mind-blowing”, the first Quad-curved Waterfalls model smartphone that features a curved screen on all four sides and edges of the phone.

The Chinese company posted a photo poster and video unveiling this concept device via its official Twitter account. If you look at this device, the four edges of the device curved at 88 degrees around the device’s all sides. Though curved corners in the market are not new, only the concept of all four corners curved is new. In other words, the first Quad Curved Waterfall Glass Smartphone of the company would really a unique concept in the market. From the front, the device would seem to be mostly covered by the display. The concept device features no ports or physical buttons.

The Chinese tech, Xiaomi further added that the quad-curved was achieved at 88 degrees through “uncountable breakdowns in glass bending and lamination technology to extend the display limit to infinity.” Xiaomi also mentioned that the device is designed as a port free unibody design and has been built using a total of 46 different “groundbreaking” patents. But, the durability of the device will also be a big problem, as all sides and edges make it more possible to break even with a light or normal falls because of its glass/display. 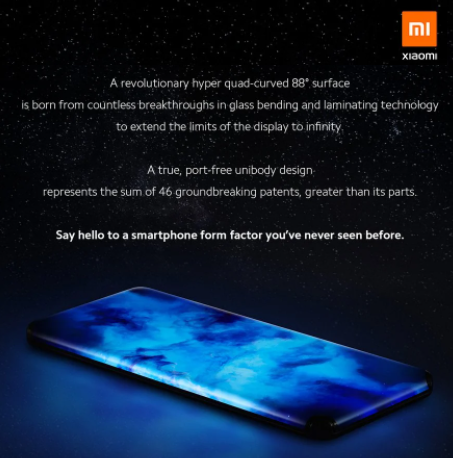 Likewise, in the past also, other OEMs have shown their curved edge smartphones. These devices typically have just two curved edges on all sides of the device and do not include the top and the bottom edge of a smartphone. While Xiaomi’s new device definitely looks exciting at the moment, it is not clear if the company is genuinely looking to launch this device on a commercial level or not. Yet, Company did not disclose the launch details of this unique device.