Xiaomi the fitness tracker Mi Band series has been an enormous success last year. Last June the Mi Band 5 in China was released and made its worldwide debut in July. Now, a successor is on the way after less than a year and will launch as the Mi smart Band 6.

Are you ready for the brand new #MiSmartBand6?

Xiaomi announces the new Mi 11 Pro, the Mi 11 Ultra, and the Mi MIX phone launch on the same day on the 29th March event with the latest fitness band. New Mi band 6 is expected to come with new features and updates but the layout seems to have not improved.

Also Read: Galaxy A22 Will be Samsung’s Most Affordable 5G Smartphone of 2021 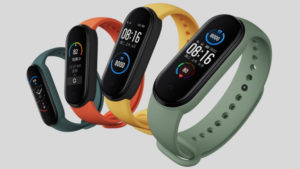 Last week Mi band 6 revealed in an image that the upcoming Band has almost the same style as its successor. The Mi Band 6 has the same magnetic charging cable as the previous one in the leaked image. Abi Go, Xiaomi’s Head of Product Marketing and the Global shared the launch of the Mi Band 6 details in a video teaser.

The support for blood oxygen level detection (SpO2 monitoring) is supposed to be part of the features of the upcoming Mi Band 6. It was unexpected when last year the Mi Band 5 was released and there was no such feature available in that version. It has also revealed that it can display up to 30 sporting modes on a bigger screen and should be available in standard and NFC versions.

The Mi Band 6 is supposed to debut as Mi Smart Band 6 outside China soon after its official launch on 29th March.