About six months ago Google has announced that a dark theme will be rolled out to YouTube for both the Android and iOS users. This happened only partially. Android users were skipped from the initial rollout while iOS users were able to take advantage of the new feature. Now, we have a good news for the Android users that they are going to get the Youtube Dark Mode feature.

Advertisement
Google has taken less than half a year to bring this feature which it promised back in March to its own mobile platform. The dark mode started to roll out to Android users this week. It will take some time to arrive on all devices as it is a staged distribution process.

The dark mode comes with a toggle that allows you to switch it off. As such there are no additional changes in terms of design. However, when you apply the new theme, the user interface becomes darker. The color isn’t really black but it is more like a dark gray. Let’s have a look at that. 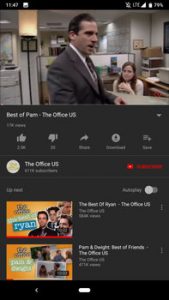 This is a server-side update so you won’t have to download anything. You’ll certainly know when the dark theme is available on your device since YouTube automatically applies it when you open the app.