Zong was a proud cosponsor for the series between Pakistan and Australia which took place in the UAE. After a set-back in the lone T20 and ODIs, Pakistan triumphed over the Aussies in the Test series with an overwhelming win after a period of 20 years.

Mr. Babar Bajwa, Executive Director Marketing Zong, said:
[pull_quote_center]Zong is pleased to be associated with Pakistan Cricket Board, we are extremely proud of our boys in green for over-powering the no. 2 ranked test team in the world. We are a regular patron of cricket in Pakistan and look forward to many more records to be made in the near future. Misbah ul Haq’s fastest test century is something we can have close association with considering we are the fastest 3G mobile internet service providers in Pakistan. Pakistan is a cricket loving nation; Zong sponsored this series as part of our commitment to promote this great game at all levels. We wish the team all the best for their upcoming series against New Zealand.[/pull_quote_center] 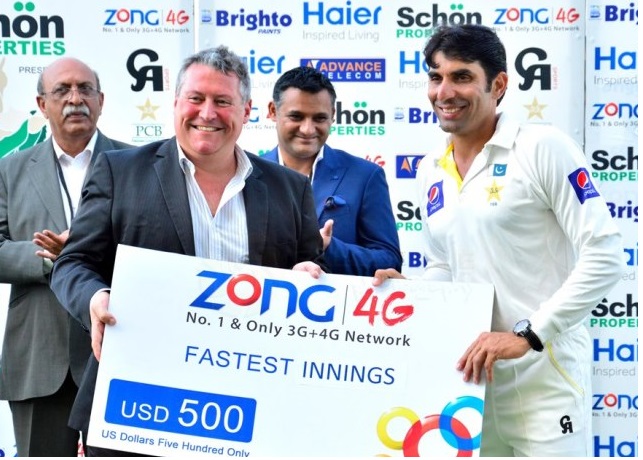 Over time, Zong has established a strong association with sports as a brand. As the fastest growing cellular network of Pakistan, Zong continues to make a lasting impact on the lives of every Pakistani. The company has previously taken many initiatives to support various sports activities in Pakistan, the most notable one being their collaboration with Football, Polo and Golf.