Cheez Mall is the latest addition in e-commerce stores in Pakistan. It has recently launched ZUK Z1 in Pakistan. ZUK is a sub brand of LENOVO, a Chinese based company with a solid impression on mobile phones and electronics market internationally. Although ZUK Z1 is a product of LENOVO, But it has officially launched by cheezmall.com.

ZUK Z1 has unveiled a couple of month ago and rumored that CheezMall had sold 5000 devices in 5 days. ZUK is Mid-ranger smartphone running customized OS Cyanogen 12.1 on Android 5.1, which gives more customization than actual Android OS. It has Metallic Uni-body –managing a huge 4100mAh battery inside the frame itself great achievement for ZUK Z1. There is a lot more feature that makes a perfect mid-ranger, a powerful Snapdragon 801 chipset, a huge HD 1080p display, fingerprint sensor, 3 GB RAM, 64 GB memory on board and many more. ZUK Z1 is available at CheezMall with price of PKR. 34,999/-.

You can place you order at cheezmall.com

ZUK Z1 packs in white color box along with bunch of accessories. The box has almost everything like 5V/2A charger, USB Type-C 3.0 fast cable, USB-to-Type-C connector, a leather-case for ZUK Z1 protections, tempered Glass screen protector. As ZUK Z1 is launched by a Chinese website Cheez MALL.COM and it also giving 1 year warranty however the headphones are not shipped with the box.

Price and Specifications of ZUK Z1:

When it comes to display, ZUK Z1 has 5.5” FHD IPS behemoth display. The resolution is 1080 x 1920 px having pretty decent no of dpi that is 480 dpi. The IPS 1080p display is a perfect and suitable choice for mid-range smartphones. The screen brightness can be controlled automatically by sensor, while you can set manually from quick settings options. Surprisingly, the display has no protection for scratches and dust, but don’t worry ZUK is providing extra cover protector for the display, yet the original has its own place. 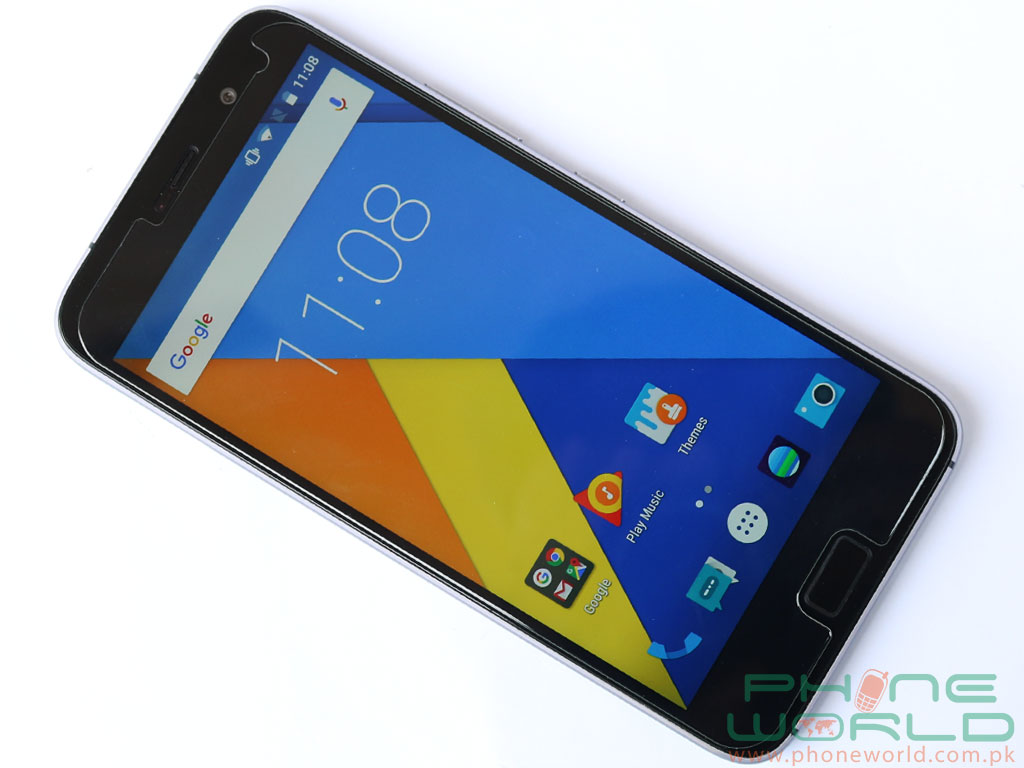 ZUK Z1 measures 155.7 x 77.3 x 8.9 mm dimensions. Although it goes a bit thick but it pays back with extra battery capacity. ZUK Z1 is almost 156mm taller and 77 mm stretched which is normal for a mid-range smartphone.

Let’s start with front side, 5.5” display is dominant on the front, the top most area has earpiece at center, 8 MP front camera is placed at right side of earpiece, while the notification LED is also along with couple of necessary sensors.

The bottom of front has button (U-Touch) with fingerprint senor, which have many function to do. Left and right side has virtual buttons that can been only seen while their LEDs dots are illuminated. ZUK Z1’s physical button performs 5 different operation, it can sense the fingerprint, touch on the button take you back to previous activity, pressing the button goes to home screen, double press leads you multitasking and touch slide switching the Apps. No doubt it’s first of its kind of button performing several operation though it has minor issue with slide switching App functions.

The side have chamfered edges with curved shape –giving strong grip in hands.  Each have some essential luggage to carry on. The top edge has nothing except 3.5 mm audio jack and two tiny dark gray chrome can also be seen.Bottom looks much busy as it carries pin holes for speaker and mic, Type-C 3.0 port is placed at center bottom edge, in a technical terms it is 10X times faster than traditional USB 2.0.

The volume rocker and power key are placed at right edge which is under the thumb range.The opposite edge has just single try for two Nano SIMs.

ZUK Z1 has 13MP Sony IMX lens on the back along with Dual LED flash and extra mic is next to them. Other than this back has nothing to carry.

ZUK Z1 has 3 GB RAM and 64GB memory out of the box. There is no MicroSD card slot that allow you to expand the memory section, but 64 GB is more than enough space for a smartphone. As ZUK Z1 is packed with snapdragon 801 processor which is itself a powerful processor and Android 5.1 does also support Multitasking, so 3GB is an ideal choice for powerful processor. The more you have RAM the more quickly switch you Apps and you hardly feel any lags.

ZUK Z1 runs Cyanogen OS 12.1; which is based on Android 5.1 Lollipop. Cyanogen is famous for its large customization supports which android doesn’t allow. The lock screen show notifications and time, it also gives you access to camera and dialer. It can be unlocked by fingerprint or and any commonly used mechanism for locking can also applied to unlock the ZUK z1.

The home screen has same interface as android has, digital clock widget is there and few commonly used Apps. The home screen can expanded by adding slides as the shortcuts increased. The drawer is also available which takes you to Applications menu. All the apps are sorted in Alphabetical order so that can easily access the app by its first alphabet.

The notifications area shows notifications that you receive from installed Apps. The Quick settings option is there to make some quick changes, like brightness control, WiFi and Bluetooth button are bigger than others.

ZUK Z1 is packs with snapdragon 801 chipset. The processor has excellent performance in profile and also provides better battery life. Nowadays, the mid ranger are equipped with octa cores processor and low-power GPUs. Well, in overall performance ZUK Z1 has quit impressive specs in profile, it has Quad core snapdragon processor coupled with 3GB of RAM. The snapdragon 801 has Krait 400 cores with frequency of 2.5 GHz.

ZUK Z1 got 58813 points in antutu benchmark, the krait 400 is though a good chipset of its time, but in present era it couldn’t make place in top 10s. It is behind the LG G4 which has snapdragon 808 SoC. So its quit clear the ZUK has older chipset than LG G4. Here I would like to come this into your knowledge that ZUK Z1 has Andreno 330 GPU which is considered a outdated now.

Well; that was what antutu’s result based on, but frankly speaking I haven’t noticed any lags while using ZUK Z1. It’s a good performer, in fact play movies, using 4G network and frequently swapping of Apps is just smooth and seamless.

ZUK Z1 has attained average points in vellamo benchmarking. The multi-core test score is 1879 points –with attained point ZUK Z1 has managed the position under Meizu MX4. The reason could be Meizu MX4 has powerful chipset with octa-core on board. But HTC ONE (M8) looks on back foot with same chipset.

In single core test, ZUK Z1 managed to get 1655 points, that’s good to it is beating OnePlus One with some points, though both has same chipset. ZUK Z1 is behind Samsung Galaxy Note 4 in this test.

ZUK Z1 is dual-SIM, LTE enabled phone that global bands.it dual standby smartphone and network connectivity include GSM, CDMA and LTE. Additionally, connectivity suit includes Dual-band WiFi a/b/g/n/ac and Bluetooth 4.1; however it does not NFC. It also have GPS and GLONASS for tracking and positioning.

ZUK Z1 made bold decision to go with USB Type-C 3.0 port which is still pretty new to market. Technically USB 3.0 is 10X faster than USB 2.0.

ZUK Z1 sports 13MP lens of back and 8 MP Selfie shooter. Cameras are place nicely and having advanced high tech features. The rear has Sony IMX 214 sensor, the famous lens for smartphone.

Camera App has simple Layout and easy to use. The bottom center button to capture images while the left is camera recording o button and opposite one is for Panorama shoot. The left side has toggles for certain function, you can find there are four buttons, camera switcher, flash controller and including settings option.

ZUK Z1 features 13 MP camera with some awesome features, 0ne of many is Optical Image Stabilizations and Dual-LED. The camera is acquired by ZUK is Sony IMX 214 sensor. OIS feature controls the camera focus while rotating or shaking the camera with help of Gyroscope.

Surprisingly, the image quality is not that much good as we were expecting, although we set the quality of image to 100%. Image was noisy and colors were stretched. But camera has much detail and dynamic range is admirable especially out door image quality is just awesome.

Camera is capable of making 1080p HD video with H.264 encoding. It can also record slow motion videos and voice is just fine with help of extra mic on back.

The camera has several mode including HDR, Night, Steady photo, color effects. The panorama mode is also not as perfect, though very disappointing. The image resolution is just 400px vertical, this is very small shot from Zuk z1.

ZUK Z1 has 8 MP lens for selfie shooter on the front, the selfie shooter’s image quality is good enough, though it also bears some noise in picture, and otherwise the camera has good result. the camera resolution is 3264 x 2448 with native ratio 4:3. it can also make HD 1080p vide0.

ZUK Z1 is packed with huge 4,100mAh Li-Ion battery. The battery has two rectangular batteries that’s why the back cover is a bit curved. Here, i want to clear one point that the ZUK Z1 does not have any special fast-charging solution but the box has 5V/2A charger that quickly charge the smartphone.

ZUK Z1 has Quad core Snapdragon 801 chipset, 3 GB RAM and 64 GB ROM is an ideal smartphone featuring huge 5.5″ HD IPS display and powered with a gigantic battery of 4100mAh. ZUK Z1 is a mid-range smartphone in term of specifications with beautiful metalic body, although it lacks fast charging yet it is provided 5V/2A charger. Unfortunatly, the camera is not upto the mark in technical terms but its still works good in daily life. The ZUK Z1 is available at very affordable price of PRs: 34,999-/ in Pakistan at cheezmall.com.