Huawei’s subsidiary Honor is working on a new wearable in order to compete with Mi’s latest band. Recently, Company CEO Zhao Ming has posted the image of the upcoming band together with some of its key specs.

The all-new upcoming Honor Band 5 has a very simple design. I think that a simple design makes a wearable look more decent so, it’s a good feature according to me. In addition to that, there is also a circle button similar to that on the old Honor Band 4. Designwise, Band 5 is quite similar to its predecessor Band 4. Let’s have a look at the image posted on Weibo: 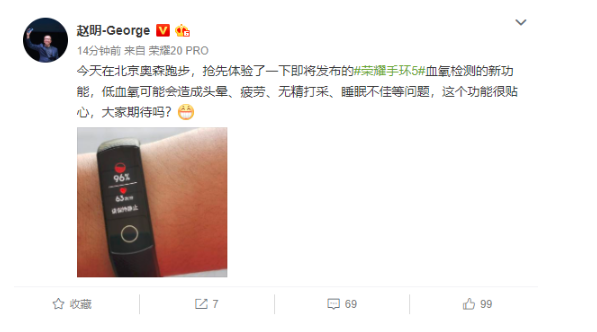 The good part of the news is that this upcoming wearable will boast a whole slew of new features. According to CEO Zhao Ming, the wearable will be able to monitor your blood oxygen levels. Furthermore, it will be able to detect fatigue and listlessness, record poor sleep and even detect hypoxemia dizziness. Along with that, it will also come with the standard health band features like heart rate monitoring and so on. This wearable will act as a fitness band. So, according to me, it will be definitely a fine option to get your hands on.

The launch of the Band 5 seems imminent. It is expected to go official with Honor 9X very soon. Till then stay tuned for the latest updates.