We have already seen a Nokia flagship this year which was Nokia 8 Sirocco. After that old chipset phone, everyone wanted to know about the Nokia 9. Well, the wait for that might almost be over. Recently, Nokia has teased that a new phone is coming soon. The company revealed that “the most awaited phone” which is most probably the Nokia 9 will release on coming Tuesday. Nokia 9 release date is set to be 21 August.

Nokia 9 Release Date Revealed by the company in a Tweet

Nokia Mobile posted an image showing a silhouette of a handset along with the text ‘get ready to unveil the most awaited phone’ in a tweet. The text accompanying the image revealed that the announcement of Nokia’s upcoming flagship will happen coming Tuesday. 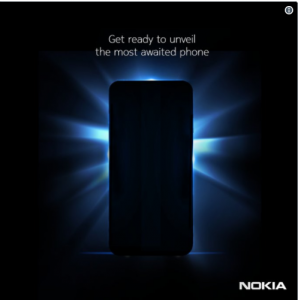 The teaser text and image don’t provide any other details, but we can’t think of any other Nokia-branded phone that’s as highly anticipated as the Nokia 9. So, Nokia 9 seems the obvious candidate. If the phone comes out to be Nokia 9 then we have an idea of what to expect.

The upcoming Nokia’s Flagship, Nokia 9 will feature a 5.7-inch curved screen. It will have a metallic body. The phone will be water resistant. It will feature dual-lens cameras on both the front and the back. In addition to that, it will have a Snapdragon 845 chipset supporting a 3,800mAh massive battery.

According to some rumors, it will have an OLED display. If that comes out true then the upcoming flagship will be closer to the Samsung Galaxy S9 and iPhone X. It will be better quality wise as well as price wise. Another cool feature it’s expected to have is an in-display fingerprint sensor. The Nokia 9 will come with Android 9 Pie out of the box.

If the engineers did their jobs right, the new Nokia could be a real heavy-hitter. We can hope to see the phone soon.

Also Read: Nokia 9 with an in-display fingerprint scanner will be Launched at IFA 2018