LG is prepping to release two new handsets at the Mobile World Congress 2019. According to the reports, LG G8 ThinQ and LG V50 ThinQ will debut at MWC. Recently, a press render of 5G Phone LG V50 ThinQ got leaked. It not only offers us a look at the company’s upcoming 5G Phone but also hints at its launch date.

LG V50 ThinQ Launch Date Is Expected To Be Feb 24

Evan Blass (@evleaks) shared the render early this morning. Let’s have a look at that. 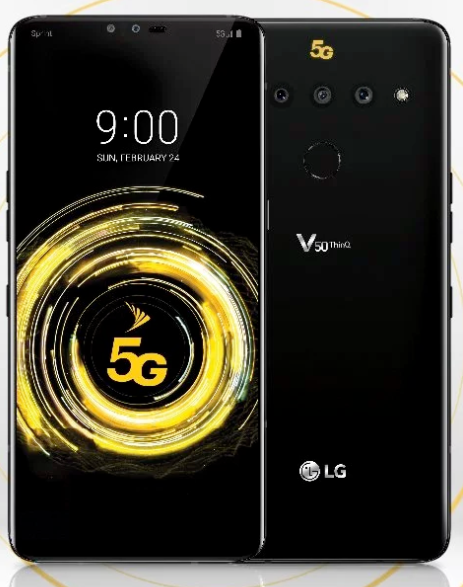 The V50 ThinQ will have a wider display than the G8 ThinQ. The upcoming handset, LG V50 ThinQ will sport a triple camera setup.  The sensors will be arranged horizontally along with the LED flash. In addition to that, there will be a fingerprint sensor below the cameras. The name of the phone will be a few mm below. Furthermore, LG’s logo in silver will sit at the bottom of the phone and a yellow 5G logo will be positioned at the top.

The phone will sport its power button on the right. On the other hand, the volume rocker and Google Assistant button will sit on the left. The bottom will most likely have a USB type-C port, speaker, and 3.5mm audio jack. According to the reports straight coming officially from the company itself, the upcoming LG 5G smartphone will feature top-tier Qualcomm’s Snapdragon 855. The handset will feature a massive 4000mAh battery that will keep the lights on. It will be 20% larger than 3300mAh battery on the LG V40 ThinQ. Furthermore, the company has claimed that 5G connectivity will not increase battery consumption.

Furthermore, the reports suggest that LG is also strengthening its partnership with major mobile operators. These operators include the ones who are mainly in Korea, North America, and Europe, where 5G service will be launched this year. The V50 ThinQ with 5G connectivity will go official on Feb 24.