As we have already reported that Huawei is working on a new model called Nova 4. Now the official Huawei Nova 4 Teaser reveals that the phone will launch on December 17th, tomorrow. Moreover, the phone will launch at Hunan International Convention and Exhibition Center in Changsha city, China. The teaser hasn’t revealed many details about the device. However, it does reveal a new honey Red color. 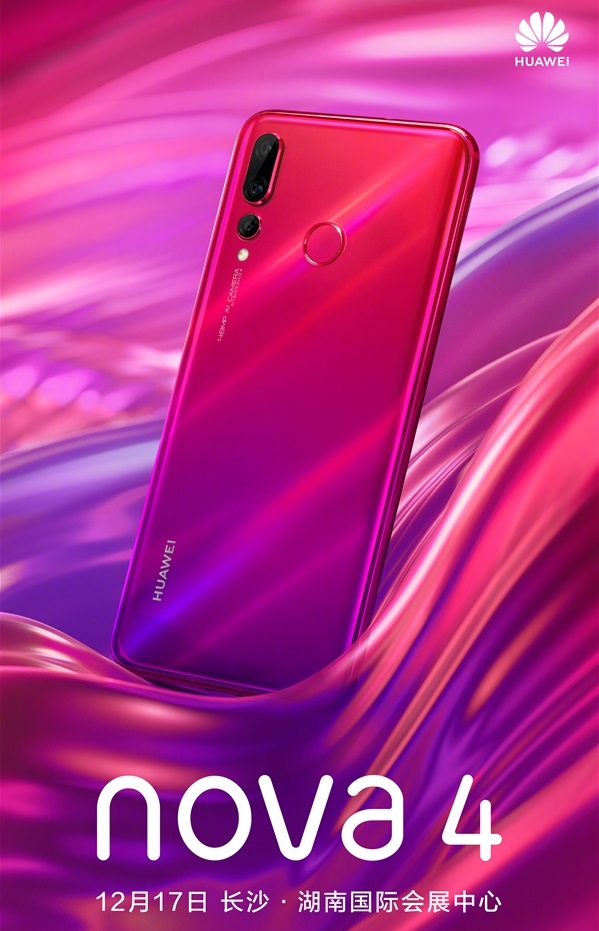 Many reports claim that the phone will come with Infinity-O display and headphone jack. Now the device appeared on TENAA. Huawei Nova 4 TENAA Listing Reveals Triple Cameras and many other specs. The listing also reveals that there is a punch hole selfie camera on the front and the 48MP main camera on the back. Moreover, the screen will measure 6.41″. Also, the battery capacity is listed as 3,900mAh. Huawei Nova 4 TENAA Listing does not Reveal much. But we will get the exact information just after one week at the launch of the device.

Previously leaked photos revealed that Huawei Nova 4 will utilize a large cut-out in the top-left corner of the display that is home to the front-facing selfie camera. Presumably, this will be accompanied by relatively slim bezels above and on either side of the display. However, we are not sure about the design of the phone.

Other than that, Nova 4 will have a 3.5mm headphone jack on top. Moreover, the device will have a USB Type-C port down below. Other specs include Huawei’s homegrown Kirin 980, 6GB of RAM, and EMUI 9 based on Android 9 Pie straight out of the box.

Let’s see what actually the Huawei will offer in Nova 4. Until now, do tell us what you expect from this smartphone in the comment section below.