Huawei is all set to launch a new model named Huawei Nova 4 on December 17. There had been a lot of rumors and leaks about the upcoming Nova 4.  Recently, Huawei Nova 4 New Teaser showed up that revealed a red and purple gradient option of the upcoming handset.

Huawei Nova 4 New Teaser Showed Up Ahead Of Launch

The company has been teasing the phone ahead of its launch for many days. The latest teaser of Nova 4 shows a red and purple gradient option. Let’s have a look at that. 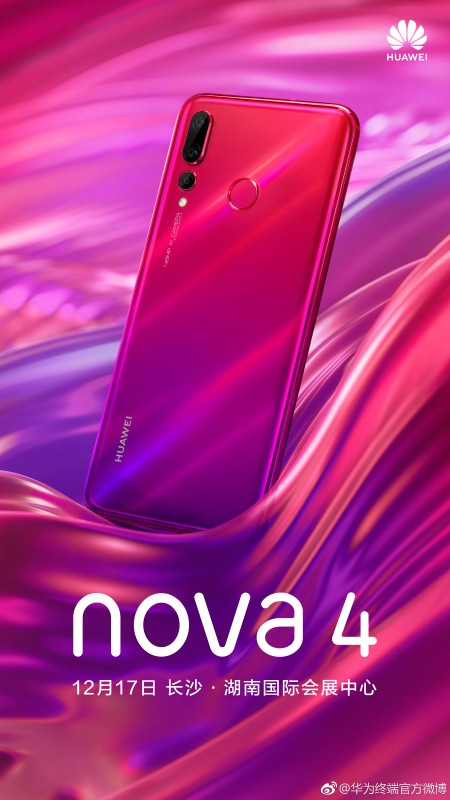 According to the previous reports, the phone will come with Infinity-O display and headphone jack. Additionally, the device also appeared on TENAA. Huawei Nova 4 TENAA Listing Revealed Triple Cameras and some other specs. The listing revealed that there will be a punch hole selfie camera on the front and the 48MP main camera on the back. Moreover, the display will measure 6.41″. Furthermore, the battery capacity will be 3,900mAh. In addition to all this, Huawei Nova 4 will utilize a large cut-out in the top-left corner of the display that will be home to the front-facing selfie camera. Presumably, the cut-out will be accompanied by relatively slim bezels above and on either side of the display. However, we are still not sure about the design of the phone as there are no official words about the handset yet.

Other than that, Upcoming Nova 4 will have a 3.5mm headphone jack on top. Moreover, the device will have a USB Type-C port present at the bottom. The Huawei’s homegrown Kirin 980 is tipped to power the handset. The phone will feature 6GB of RAM, and EMUI 9 based on Android 9 Pie straight out of the box. The handset will go official on December 17th. Let’s see what comes next ahead of Huawei Nova 4 Launch.