Pakistan holds highly successful South Asian Telecommunication Regulators Council (SATRC), attended by all Member States of the Region under the umbrella of the Asia-Pacific Telecommunity (APT). The Chairman SATRC, Mr. Digambar Jha, Chairman of Nepal Regulatory Authority proposed Mr. Muhammad Naveed, Chairman Pakistan Telecommunication Authority (PTA) as the next Chairman of SATRC and unanimously elected Chairman SATRC in the elections held at the 19th Meeting of the SATRC in Islamabad. The Member States elected Mr. Chencho Dorji, Director General of Bhutan Regulatory Authority as Vice Chairman of SATRC-19 for proposing to hold SATRC-20 in Bhutan in 2019.

During the concluding session, Ms. Areewan Haorangsi, Secretary General, Asia-Pacific Telecommunity said that deliberations through such meetings are helpful to provide international experiences with a focus on current issues and challenges faced by Asia Pacific Countries. She congratulated Mr. Muhammad Naveed Chairman PTA, for being elected as Chairman SATRC. She expects that all the APT agenda’s upcoming in the next year shall be fruitfully accomplished under his leadership. 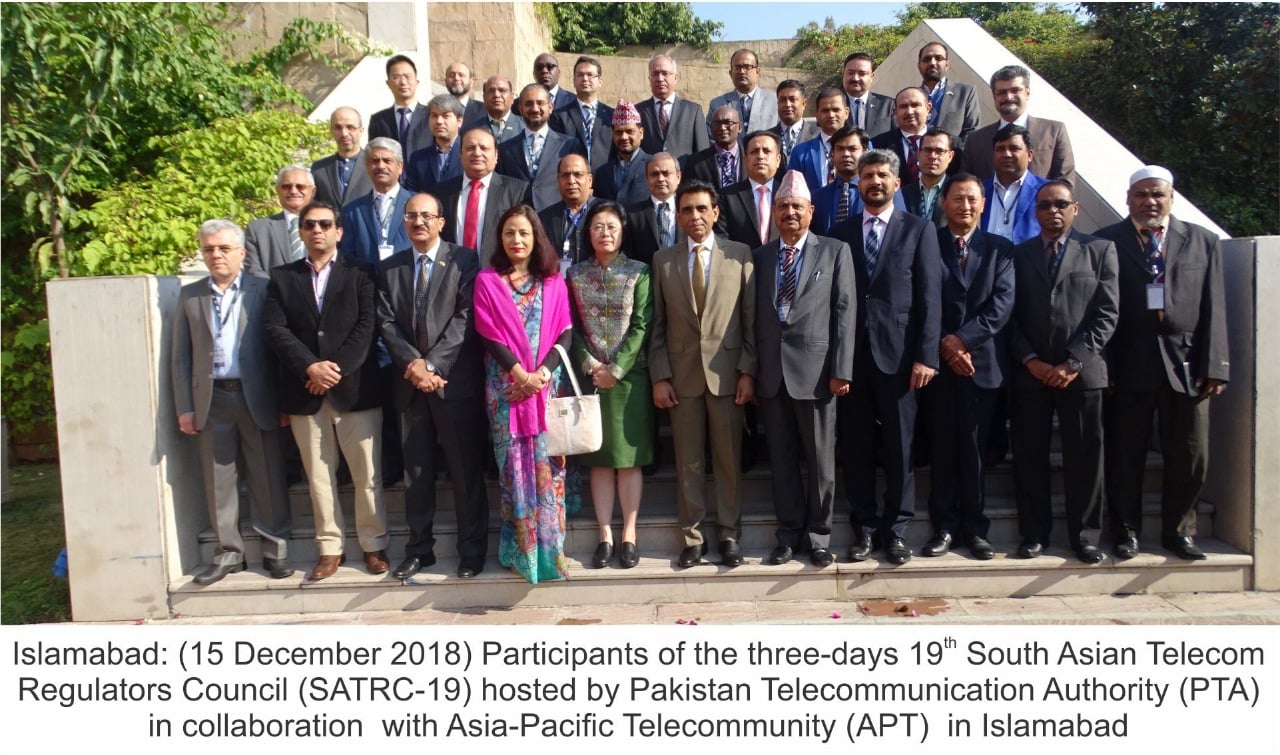 Chairman PTA Mr. Muhammad Naveed said that SATRC has already done some outstanding work and will be continued by Pakistan. As Chairman of the Council, he vowed to carry on this cooperation and engagement among the regulators in the best possible manner. Chairman said that telecom regulators of our region have some big challenges and opportunities ahead of us. Considering the fact that we have such a vast human capital, the need is to channelize our efforts towards embracing the future technologies amicably. Chairman said that the benefits of ICT driven economic growth must be passed on to the common man and we, as regulators, have a central role to play in this regard. Chairman added that, a conducive and friendly regulatory environment will not only improve the confidence of the investors in our region but also generate new economic opportunities for the population of the SATRC Region.

Mr. Mudassar Hussain, Member, Telecom, Ministry of IT, Mr. Ilyas Ahmed, CEO, Communications Authority of Maldives, Mr. Dr. Mohammad N Azizi, Chairman, Afghanistan Telecommunication Regulatory Authority, are the moderators of different sessions. The sessions concluded on the key ideas and outcomes that have emerged through knowledge/experience sharing in previous sessions and examine the principles, practices and recommendations which will assist regulators in the Asia-Pacific region in addressing the telecommunication/ICT regulatory challenges.

The aims and goals are to enhance cooperation between regulators and industry to work towards a harmonized regulatory environment, some of the major issues addressed by the SATRC were Evolution of Regulatory Framework in South Asia and Asia-Pacific, National ICT policy and Regulator’s role and its challenges, Ensuring the last mile access for providing affordable broadband services for all, Regulatory measures to enhance broadband experiences, Enhanced consumer protection in digital economy, Consideration of the regulatory framework for IoT including spectrum management for the development of IoT, Spectrum roadmap for future mobile broadband.

It is pertinent to mention here that, the SATRC meetings are held annually and attended by the heads of telecommunication regulatory authorities in the South Asia Region, senior officials of the Ministries and Departments, and Industry. The SATRC meets annually to discuss the key policy and regulatory issues of concern to the SATRC members. The SATRC-19 concluded with Regulator’s Roundtable, Industry-Regulator dialogue and Industry Session. At the Regulators’ Roundtable, the heads of the regulators shared their experiences on different regulatory issues to overcome the challenges collectively and facilitate the business environment. During the meeting outcomes and implementations of the SATRC Action Plan Phase V1 was highlighted and new SATRC Action Plan Phase VII was discussed.  In meeting Regulators also identified the possible areas of cooperation in South Asia through SATRC. SATRC meeting was a wide opportunity for the industry to raise their concerns and share views on the current and future regulatory trends and their expectations from the regulators.