For its latest phone, Google has this time partnered with Huawei to produce Nexus 6P. The partnership is odd as Huawei’s home market China doesn’t support Google services bus still Huawei has managed to make one of the greatest Nexus phone ever. Huawei Nexus 6P Review The best Nexus Ever will guide you with the best features, the pros and cons, the camera along with the full specifications and the price of Nexus 6P in Pakistan in the proceeding content.

The overall specifications along with the CPU-z sensors, battery performance, battery consumption, OS and its detail and the information concerned about the display and the dimensions of the camera and the display are all mentioned in the images below.

Pros and Cons in Nexus 6p:

Every tech devil must have some better and some bad features. The good and the bad of Nexus 6P have been discussed below.

The Huawei’s bulid smartphone for Google as Huawei Nexus 6P is the first all metal handset in the Nexus series with a premium design. It’s made of CNC-machined “aeronautical-grade aluminium” which is quite nice. It’s the same size as an iPhone 6S Plus but weighs 20g less. There is a glass window at the top of the back of the device, which protrudes slightly and houses the camera lens, laser auto-focus and flash, and also provides a window for the NFC and antenna. It serves a purpose, but aesthetically, it’s the strangest part of the Nexus 6P design. Above the logo is the new fingerprint scanner, lined by a shiny circle. 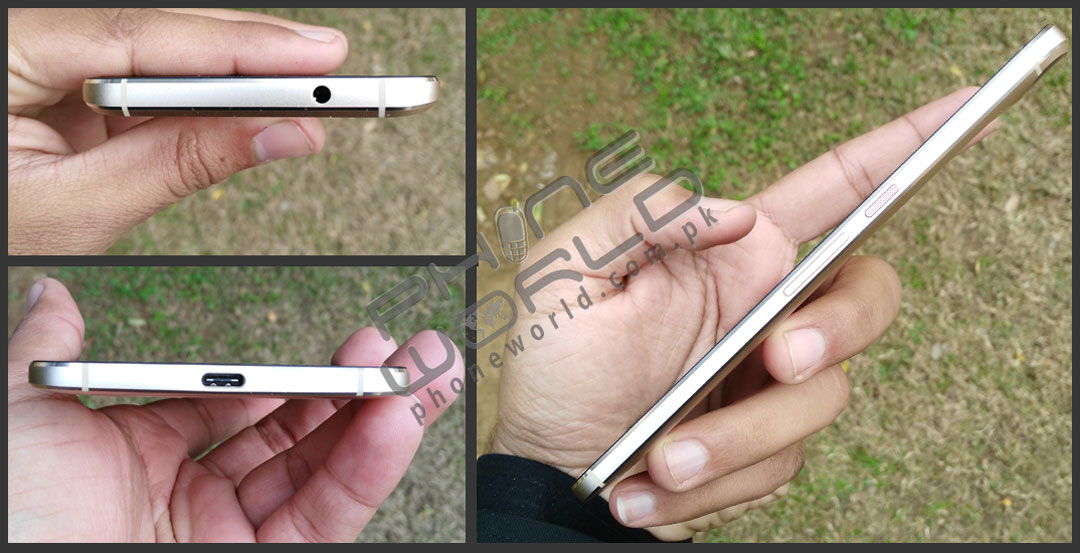 The Nexus 6P’s huge 5.7-inch display doesn’t let the side down either. Its 2K (2560 x 1440) 16:9 AMOLED panel is among the best around with rich but accurate colors, deep blacks and wide viewing angles. The Nexus 6P’s display is practical too. It uses Gorilla Glass 4 and there’s an oleo phobic finish which is one of the best at resisting fingerprint smudges and oil buildup. The pixel density of about 518 pixels per inch, so it’s no surprise, then, that text and detailed photos appear incredibly crisp.

With the Nexus 6P, we get a 12.3MP Sony sensor on the rear camera and an 8MP front camera. The pixel size is at 1.55 microns on the rear sensor and 1.4 microns on the front camera. The rear camera is capable of shooting 4K videos at 30fps. In general, the 6P is a strong performer when there’s plenty of light but in low light shooting results are also quite better than a lot of the phone cameras. The camera has a good automatic shooter, and fast, even when shooting in HDR+ mode, with the processing being done in the background in the Gallery app.

Huawei Nexus 6P has been powered with a 12.3MP Rear camera that takes better images with size from 4 to 5 MBs. The dimensions of the rear camera image are (4032 x 3024 pixels). The camera is also supported by a dual flash LED along with multiple sensors like location sensor, auto light detection, auto focus and many more. The image taken with the rear camera of Huawei Nexus 6P can be seen below which has been taken in a perfect day light. 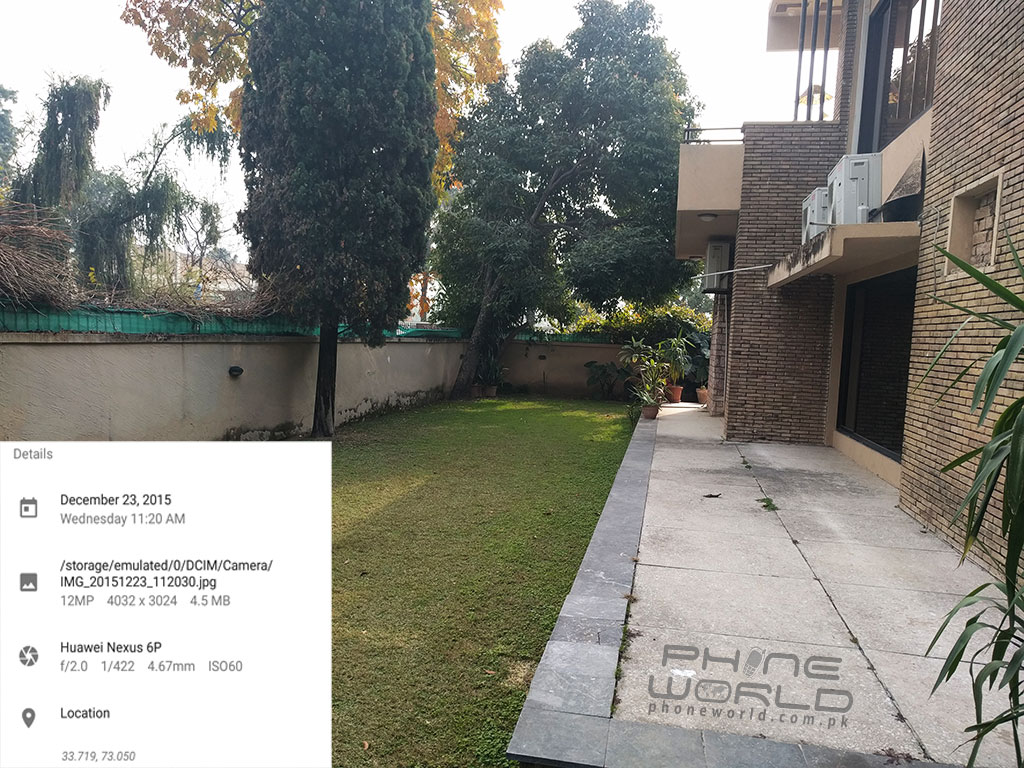 The front camera is also better than the others of its tribe and Huawei Nexus 6P has been powered by an 8MP front camera which takes images in the dimensions of 3264 x 6448 as shown in the details of the picture been taken and attached with the front image of Huawei Nexus 6P. The size also ranges from 2 to 3 MB which is a better influence of the 8MP camera upon the customers enhancing their choice of Nexus 6P as their selection. 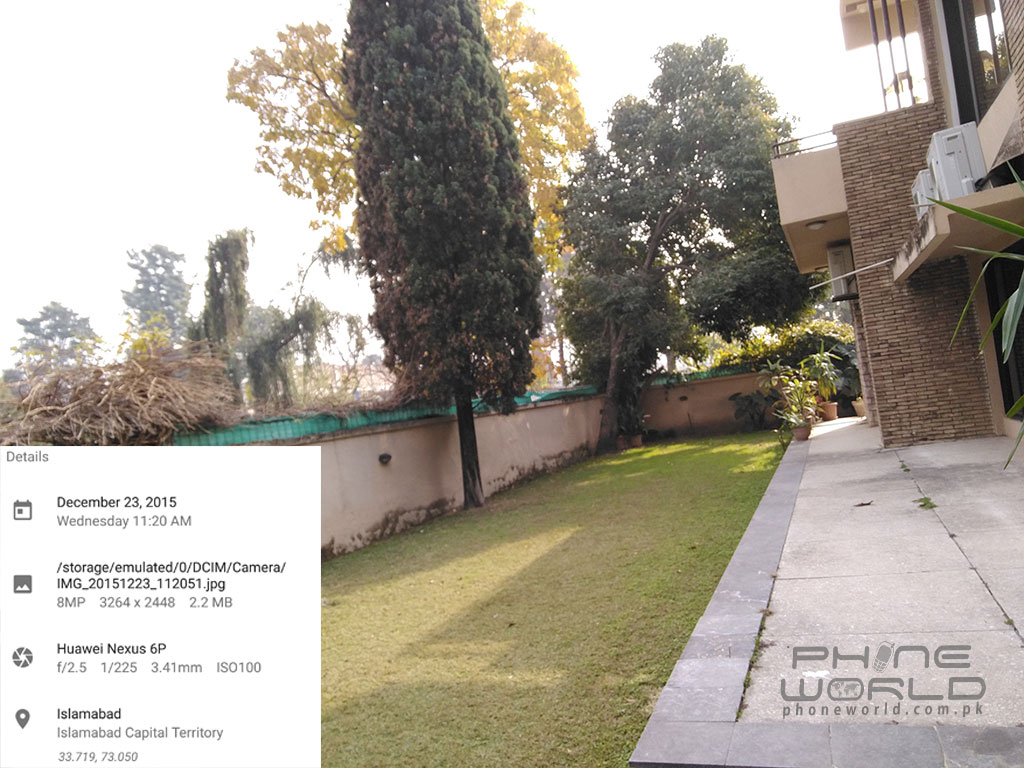 The Nexus 6P is powered by Qualcomm’s Snapdragon 810 SoC. This is a big with a quad-core ARM Cortex A57 cluster at 1.95GHz serving as the high-performance cluster and a quad-core Cortex A53 cluster running at 1.55GHz serving as the high-efficiency cluster. Graphics are powered by Qualcomm’s own Adreno 430 GPU which should be plenty to serve the 1440p screen of the Nexus 6P.

Huawei Nexus 6P is moduled with 3GB RAM and a huge ROM of three flavors that comes in 32GB, 64GB and 128GB depending upon the customer’s choice. Though there is a drawback that there is no card reader slot for expanding the memory and all a user has to do is to make sure that he has to keep the data in the limitations.

Despite being a physically smaller device, the Nexus 6P packs a more capacious battery than last year’s Nexus 6. In day-to-day use, the Nexus 6P routinely lasted through 13-hour workdays with around 30 percent left in the tank. The inclusion of USB Type-C means the Nexus 6P can also act as an external battery for devices with the same power port. This will be an absolutely incredible feature once we get more phones with Type-C ports.

As Huawei Nexus 6P is a smartphone designed by Huawei for Google One. There are regular updates for the device and user may get benefit from the latest version of OS as shown in the third snapshot. The interfaces have been given in the images below.

For the benchmarking of 6P, we used three benchmarking apps Vellamo, Antutu and GPU that gave the scores that tells us where the device stand with comparison to other devices.

When we benchmarked Huawei 6P using Vellamo, the result we got were better than Samsung Galaxy S6 which is a great achievement for 6P.Huawei 6P got 5294 points while Samsung S6 got 3589 as shown in the screen shot. Similarly we got the very impressive results for Metal and multi core as well.

Antutu is another app widely used for smartphone benchmarking that also provide detailed information about the device. By using Antutu and we got approximately 79 thousands scores for our Nexus 6P that is comparatively a good score. Huawei 6P stands above Nexus 6 which shows improved performance in Nexus series. You can see Antutu result in the screenshots.

Considering the comparison of Samsung Galaxy S6 with Huawei Nexus 6P in the Huawei Nexus 6P review, you may judge the better score of Nexus 6P after the score taken by Samsung Galaxy S6 as been the best smartphone world over. The GPU of Qualcomm with chipset Adreno (TM) 430 further enhances the urge and need of Nexus 6P as a favorite device which is powered by Qualcomm. The score and screen resolution normalized score along with the average number of frames have been shown in the images below.

All in all the Nexus 6P is a very solid device and Google made a good choice in sizing down to 5.7” to try to attract a wider user-base who maybe wasn’t so convinced by the Nexus 6’s very large size. The Nexus 6P is a high-end phone, while offering a premium experience under the hood, including a camera that finally does justice to the flagship line. If you do want Android in its purest state, either of the two 2015 Nexus smartphones will do, but when looking for a high-end experience, the Nexus 6P takes the crown.