The Huawei P50 and Huawei P50 Pro have been formally released in China. Powered by the new HarmonyOS, this flagship set is the first to have this new operating system (without Google services and apps). Due to US restrictions, Huawei has been unable to build new phones and has been unable to purchase processors and other components from companies using US technology. Affected by US sanctions, Huawei has decided not to include 5G chips in its P50-series phones. They are available in Qualcomm and Kirin versions, both versions are limited to LTE. 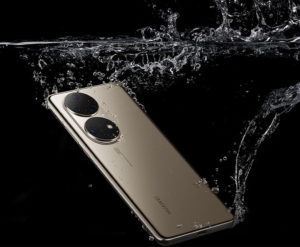 Also Read: iPhone 13 might get a slight delay due to global chip shortage

Officials from Huawei said that 5G is out of their range, that is why they are eliminating 5G modems from their silicon. It is powered by Qualcomm’s Snapdragon 888 4G processor, which includes 8GB RAM and 128GB/256GB of internal storage, which can be expanded through Huawei’s proprietary memory card.

As always Huawei deliver outstanding cameras, the camera system inside the P50 is the most interesting aspect of the device. Huawei and Leica collaborated on the cameras’ development. This lens features a periscope-telephoto camera. 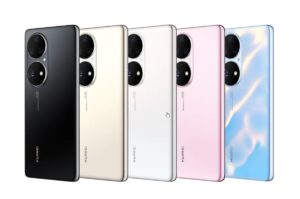 50MP wide-angle camera assisted with OIS, a 13MP ultrawide lens, and a 12MP periscope zoom lens with OIS and 5x lossless magnification all are onboard. Autofocus is handled by a laser AF module, while selfies can be captured with a 13MP camera.

Bezel covers the display, which is flat and paper-thin. 6.5-inch QHD+ OLED panel with 10-bit pixel resolution, 90Hz refresh rate, an in-display fingerprint scanner. There are two stereo speakers on the Huawei P50, and the device is IP68-rated protected. 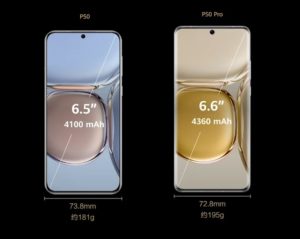 The device has a 4100 mAh battery capacity that can be charged at 66W. Colours options include black, gold, and white shades. Starting price is CNY 4,500 (approximately Rs. 112,800), the P50 will be available in worldwide markets in September.

The Pro model is available with both the Snapdragon 888 4G and Kirin 9000 processors. A 4360-mAh strong battery powers Huawei’s latest model phone, which supports charge power of 66W via a wired and 50W without wire. Up to 12GB RAM and 512GB of internal storage are available. 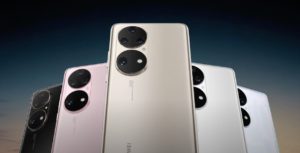 P50 Pro includes a quad-camera setup: a 50MP wide lens with (OIS) as well as a 64MP periscope lens with OIS and 3.5x optical zoom, a 13MP ultrawide lens, and a 40MP black-and-white camera fitted in the camera setup. The 13-megapixel selfie camera is available on the front.

However, this display has curved edges, with a 120Hz refresh rate, and 6.6 inches display is provided. Dual speakers and IP ratings against dust and water are also similar to P50.