We all know that the Government of Pakistan announced that all the Pakistanis living abroad cannot carry more than one mobile phone free of customs duties. The overseas Pakistanis can bring only one phone free of duty in a year. The government has been facing a strong criticism over their this decision. So, According to the latest reports, we have come to know that the Government is considering to revise the policy and may allow at least two Duty Free Phones.

Syed Zulfikar Hussain Bukhari (Zulfi Bukhari) tweeted about this issue. He revealed that the government has received a negative feedback regarding the new regulations. So, the government is considering to revise the policy.  He has indicated that the government of Pakistan might relax these conditions a bit for the overseas Pakistanis very soon. He further added that he personally requested the Minister of State for Revenue, Hammad Azhar to lower the tax and to allow at least two duty-free phones instead of one. Let’s have a look at his Tweet first. 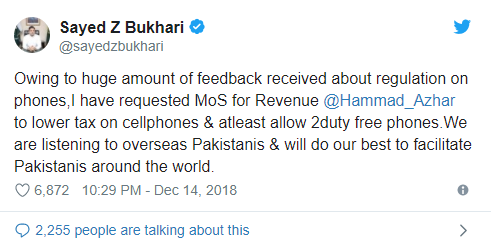 Pakistan Telecommunication Authority (PTA) had also reportedly taken up this issue but remained unsuccessful in convincing the government. So, just wait and see that whether the Government will revise the policy or not. If they would do so, it will facilitate the Pakistanis living all around the world by allowing them to bring at least two duty-free phones.