In Pakistan Telenor is the second largest operator acquiring 28.5% of the total market and having total of 38 million subscribers and around 9 million only 3G subscribers. Its recent acquisition of 85o Mhz spectrum will further enhance its subscriber’s base in the country.

$9,672M Mobile Financial Transactions are Made via Telenor Pakistan: Report

Telenor introduced services in Pakistan in March 2005, following the award of a GSM licence in 2004. During short period of time, it has introduced many new initiatives in the country along with EasyPaisa; which earned prestigious Wall Street Journal Award twice. The recent report “Telenor’s Global Impact: A Quantification of Telenor’s Impact on the Economy and Society ” launched by the mobile service carrier has announced its performance update while functioning in 13 countries of the world.

Mobile communications can help to support financial enclosure of people in society who have insufficient or no access to financial facilities by giving smartphone users the means to access mobile banking, mobile payments and other mobile financial services. Report estimates that by using Telenor’s services, subscribers made a total of $9,672 million of mobile financial transactions in 2015. 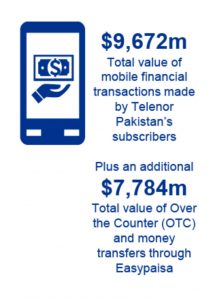 In 2015, the value of transactions through Easypaisa was $7.8 billion, equivalent to nearly 3% of Pakistan’s GDP. Telenor Easypaisa won Wall Street Journal’s Financial Inclusion Challenge. The Wall Street Journal is one of America’s most ornamented financial publications that currently spread all over the world. EasyPaisa is available to all mobile owners of Pakistan because only the 15 % population of Pakistan has bank account while over 70 % population has mobile phones.