Samsung Galaxy A70 was launched back in April this year. Recently, the phone got updated. The Galaxy A70 Latest Update has brought the much-awaited Night mode together with some significant changes. In addition to that, it also added the July security update.

Galaxy A70 Latest Update Is Making It Way To All Users

The latest update A705GMDDU3ASG6 weighs 367 MB. It is available in India right now and is making its way to the other countries in phases. The update has brought the dedicated Night Mode. Before this, the handset was missing this feature resulting in sub-par low-light shots as compared to other mid-range devices. In addition to that, the update also added the July Security Patch. Furthermore, it has now a dedicated QR scanner in the camera interface as well. Moreover, the new update also includes stability improvements and minor bug fixes. 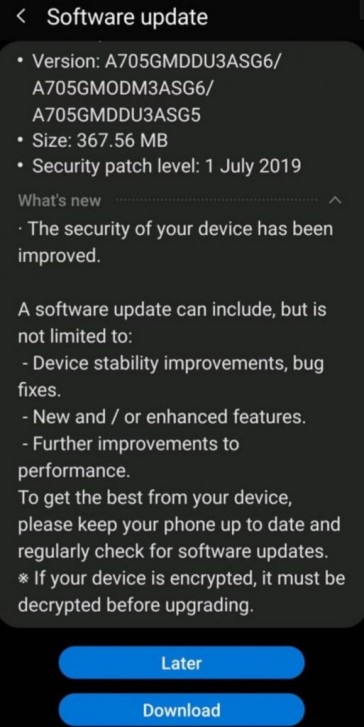 Samsung Galaxy A70 features 6.7″ display with AMOLED FHD+ Screen. It is paired with 6GB RAM and 128 GB ROM, that can be expandable up to 512GB with the help of MicroSD. The device comes with Infinity-U Display with the resolution of 1080 x 2400 pixels (~393 ppi density). It runs on Octa-Core Processor having  Non-removable Li-Po 4500 mAh battery.

Let’s see when will this update make its way to our country. If any of you own Galaxy A70 and receives this all-new update then do share with us in the comment section. Stay tuned for more updates.