According to the previous reports, Samsung started the production of Galaxy M Series in India a few months ago. The highly anticipated Galaxy M series includes Galaxy M10, M20, and M30 which are on their way to be assembled in Noida, India. There had been a lot of rumors and leaks about this series.  Samsung Galaxy M20 got Certified By FCC as well. Recently, Galaxy M20 Live Image popped up that shows the Infinity V notch of the upcoming handset.

According to the leaked live image, the Galaxy M20 will feature an Infinity-V notch that will be smaller than you imagined it to be. In addition to that, there will be a breathing LED strip surrounding the notch. This breathing LED Strip will light up every time you unlock the phone. Let’s have a look at the leaked image. 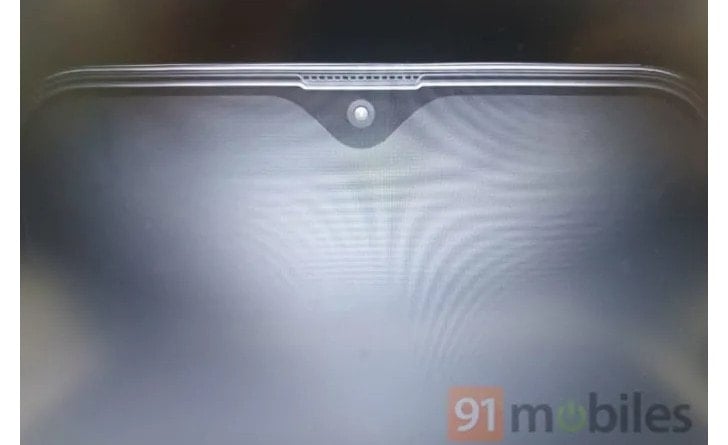 According to the FCC certification, the Galaxy M20 will be quite similar to the M10 design-wise. However, it will be thicker and slightly bulkier than that model. The handset will feature a dual rear camera setup (13 MP + 5 MP) on the left side, with a LED flash underneath. The notch will apparently house an 8 MP selfie snapper. In addition to that, the fingerprint sensor will be on the rear too. Furthermore, the back itself will be made from polycarbonate with a Glass finish.

The device will feature a USB-C port at the bottom. Moreover, there will also be a speaker grille and a 3.5mm headset jack. The M20 is rumored to come with the biggest Samsung’s battery ever. It is tipped to be of 5,000 mAh. The Galaxy M20’s screen size will be 6.13″ with FHD+ resolution. Furthermore, it is expected to be powered by the Exynos 7904 SoC, paired with 3GB of RAM. There will be two storage variants that are 32GB/64GB. The Galaxy M20 is expected to go official very soon.