Google said the service, which acts as an online directory to help trace loved ones caught up in disasters, was launched within three hours of the quake. The service was created in response to 2010 earth quake in Haiti, and subsequently rolled out in over 75 languages as disaster struck from Chile to Japan to Nepal over the years. On Monday, Google said it was allowing users to feed information in Urdu, the official language in Pakistan, where temblors injured more than 400 people and working on versions in Pashto and Dari for Afghani users.

The tool allows users to enter the name of a person they’re looking for, or enter information about someone who is there. Users can select the “I’m looking for someone” tool and enter the name of their loved one to see if there has been an entry added for that person; or, users can select “I have information about someone” to add a person’s name to the list. 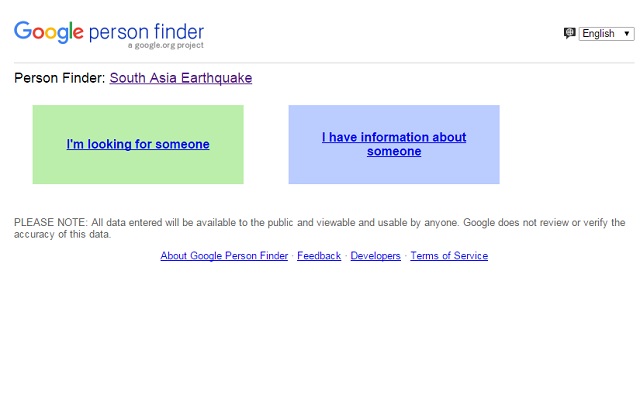 According to the United States Geological Survey the magnitude 7.7 earthquake struck in north-eastern Afghanistan, Pakistan and parts of India. However the Pakistan Meteorological Department said the magnitude of the earthquake was 8.1.

The quake was 196 km deep and centred 82 km south-east of Feyzabad in a remote area of Afghanistan in the Hindu Kush mountain range killing scores of people and injuring hundreds of others in the region. More than two minutes of sustained tremors were felt in the Pakistani capital of Islamabad. The quake also hit the cities of Lahore, Faisalabad and the mountainous region of Chitral.