Google is all set to launch the Google Pixel 3 & Pixel 3XL on an event which is going to be held on October 9. There had been a lot of rumors about the upcoming smartphones. Google Pixel 3XL is considered to be this year’s worst kept secret because a few days back a person was caught selling the production Pixel 3 XL devices on the black market. So, this showed us the basic design of the phone unveiling its huge notch, big chin and glass window on back. Recently, a Twitter user Ishan Agarwal posted some new leaked pictures of the upcoming smartphone. These Google Pixel 3XL Leaked Images show a frosted glass back with mint colored power key.

The high-resolution photos of White Colored Pixel 3XL show the massive size of the notch at the top of the display and the rather large chin at the bottom. However, there is no way to hide the notch. According to Twitter handler IshanAgarwal24, the SIM tray of the phone locates at the bottom of the device. In addition to that, there are also a couple of screen grabs of the redesigned Camera UI and the refined Google Assistant prompt.

According to the leaker, the phone will feature two front cameras of 8MP. One will come with an Auto Focus and f/1.8 aperture while the other will have a wide angle with FF and f/2.2. He also confirmed that there will be no 60fps recording for 4K res-video. However, the company may add it at the launch or in a future OTA update. 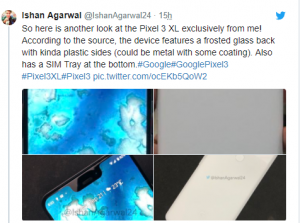 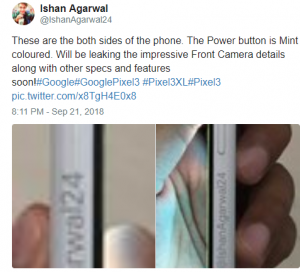 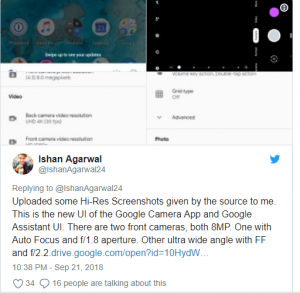 As revealed by countless leaks before, the Pixel 3XL will make use of a slightly larger 3,430mAh battery. It will support Quick Charge and wireless charging. Moreover, it will sport Android 9.0 Pie straight out of the box.
Also Read: Google Pixel 3 and Pixel 3 XL will Launch on October 9th
Laiba MohsinLast Updated: Sep 22, 2018
Share
Facebook Twitter Pinterest