Here comes Haier Esteem i50 with reliability, strength, lineaments, in a delightful design with an affordable price to the Pakistani market to make a hole through the congested market share by many a smartphones that have covered it in advance. Yes! its Haier Esteem i50 with a huge screen of 5 inches that makes a good total of screen to body ratio and adds almost nothing to the whole body weight. The weight is 138 grams that makes it sleeker than before and lustrous from the best ever releases by Haier Mobiles. Quad core processor, 1GB of RAM and 8GB of all-encompassing memory that can still be enhanced with a memory stick. 8MP Rear Camera and 2MP of Front Camera all set in a plastic body whose back is made of Kevlar material and the front display is protected with a Corning Gorilla Glass 3 with a slight change in temperature of just about 7 degrees from 33 to 40 in the stability test proves the genuineness as proved in the detailed Haier Esteem i50 Review below.

Some fast specifications in Haier Esteem i50 Review:

Pros and Cons of Haier Esteem i50:

Design and Display of Haier Esteem i50:

Haier Esteem i50 is a flat and sleek device that has a slight curve at the back removable cover, made from Kevlar material. The dimensions of Haier Esteem i50 are 143 x 72 x 7.5 mm. The display is protected with Corning Gorilla Glass 3 that gives extra strength to the display and makes it scratch proof and shiny. The display is 5″ IPS LCD capacitive display with 720 x 1280 pixels resolution. The screen is also integrated with 320 density pixels per inch that for sure is a good total. The driver for the display is Mali-400 MP just because the processor used for Haier Esteem i50 is of MediaTech. The screen also supports up to 5 points multi touch support. So all we can just say is that a lot of attention have been given to the display in special.

Processor of Haier Esteem i50:

Haier Esteem i50 is powered with a super fast Quad core processor which is clocked at 1.3 GHz of type 32-bit and with a total of 4 cores in general. The architecture is ARM Cortex-A7 and the frequency fluctuates in between 598.0 and 1300 MHz. Chip set is of Media TeK with chip set model MT6582. After testing the processor for stability, the results obtained were a little bit shaky and this is because of the Media Tek chip set that gets higher heat in comparison to Qualcomm. The result is visible in the image below that shows almost 10 degree difference which is almost 2 degrees in a Qualcomm processor after test.

Memory for Haier Esteem i50 Review:

A total of 1GB RAM is included in Haier Esteem i50 that is also supported by a total of 512MB swap memory which is a memory that can be used from the secondary memory(ROM). The total ROM is 8GB that can be exceeded to 64 GB as well with the help of a memory card in the memory card jacket after removing the Kevlar’s back cover just besides the SIM jackets.

Camera within Haier Esteem i50 Review:

Haier Esteem i50 has a dual camera support, the rear one of which is an auto-focus cam which is also supported with a Flash light. The rear camera is at the exact center of the back and its power is 8MP as mentioned in the snapshot below.

Rear Camera of Haier Esteem i50: 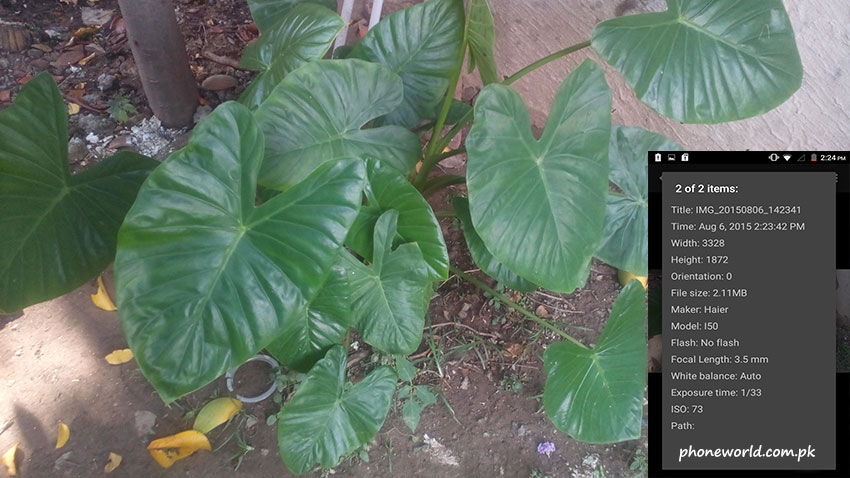 Front Camera of Haier Esteem i50:

The front camera of Haier Esteem i50 is 2MP wide camera and the dimensions are almost 1280 x 720 pixels. The size of its image is in KBs which ranges from 250 KB to 600 KB depending upon the light intensity and color variations. The details of its front camera along with the details of the image are attached in the image below. 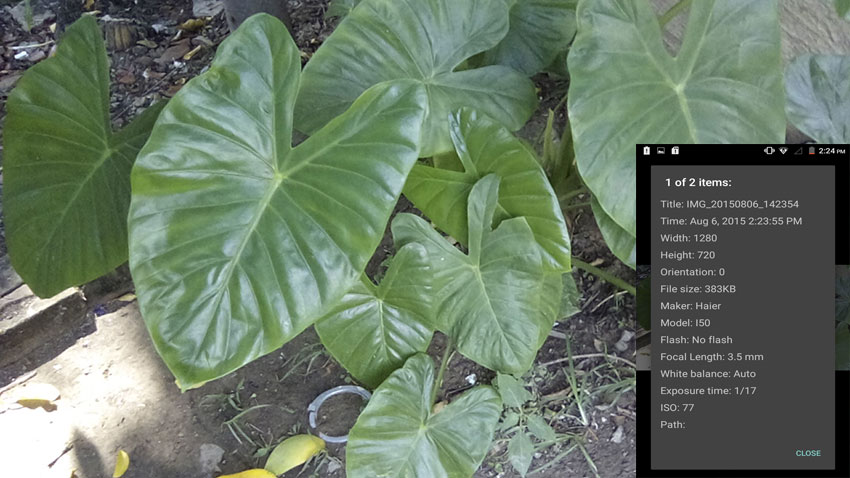 3G is a sharp trend in Pakistan and the number of Internet users have almost tripled with the release of 3G. This conceded the attention of smartphone developers to make devices that is easy to go with 3G and 4G. Haier Esteem i50 is a fast 3G supported handset with HSPA support with the help of which you can surf fast 3G internet. Haier Esteem i50 is also dual SIM.

Battery performance and Internal Storage of Haier Esteem i50:

The box contains 1 amp charger along with its USB cable, a hands free, the Haier Esteem i50 smartphone and a user manual to help the user start the Haier i50. The fourth snapshot shows the internals of Haier Esteem i50 after removing the back Kevlar cover which is smooth like foam and silky in touch. The battery is 2000 mAh removable and the dual SIM jackets along with the micro SD card jacket are given in the last snapshot.

Consider holding the Haier Esteem i50 along with its soapy foam type Kevlar back, 5″ display with Corning Gorilla Glass 3 all packed in a slim and smart body.

The charging jack, hands free port, volume keys and power keys are all mentioned in the images below.

Haier Esteem i50 is loaded with the latest Android OS Lollipop version 5.0.2 which shows:

Now lets check the real worth for Haier Esteem i50 Review. Bench marking is a procedure that can be used to test technically the power of Esteem i50. The projected scores along with the bench marks are been given by different apps are given in the preceding section below.

Antutu is an international app used to check the performance of a device. After checking Haier Esteem i50, the projected score were 17223 which is though not the best score by a 1.3 GHz Quad core processor yet the hunting is good.

Checking Haier Esteem i50 by Vellamo for its single core, multi cores and Browser, We can say that “all that glitters is not gold”.

With CPU-Z, you can have nearly all the specifications of your Haier Esteem i50, that shows the processor’s chip-set, load over CPU, the memory, the GPU, the storage available and occupied by your data, Android Version, its API level, battery’s health and its condition, temperature sensors and sensors in special. Go a head for the exact specifications in the snapshots below.

Checking the (GPU) graphics performance of Haier Esteem i50:

The score obtained by the GPU of Haier Esteem i50 is nearly equal to the score obtained by one of the QMobile’s device QMobile Noir i12. Score over 12 thousands for its overall performance by the GPU and the score of over 11 thousands for its “Screen resolution normalized score” is a better total and we must say that the GPU is working properly and work has been done for Haier Esteem i50 in the Graphics processing unit part.

Conclusion about Haier Esteem i50:

Haier Esteem i50 has a nice display that is able to play HD movies with its 5″ 720 x 1280 pixels display. The display is also protected with Corning Gorilla Glass 3 that has been tested by rubbing a key against its screen that was scratch less by the way. The performance is good and is normal as it can be expected from a Quad core processor. The Antutu results were 17233 with its 1.3 GHz Quad core processor, 1GB RAM and 8GB ROM that is being operated with Android OS 5.0.2. The battery is 2000 mAh that works fine and sound. The prices of Haier Mobile smartphones are also affordable in the fast and sharp market of a country like Pakistan.