There had been a lot of rumors about Huawei’s Upcoming P30 Pro. According to the latest reports, we have come to know that Huawei P30 Pro is expected to feature a curved display with a notch design over a hole.

According to some of the rumors, Huawei P30 Pro will debut with a curved display panel featuring a notch design. The P30 Pro is also rumored to have a 38-megapixel Sony IMX607 sensor. Furthermore, the sensor is expected to be powered by Exmor RS image processing technology. It will have a three-speed native sensitivity with ISO 50/ 500/ 5000. Additionally, the CMOS image sensor is also reported to have some optimizations for night shots. Moreover, it will have Dual Bayer with a white HDR Coding array. It is also tipped to come with Exmor RS technology and a built-in high-SNR. SNR will deliver bright colors with low noise. It will also include a built-in temperature and light sensor.

The tipster with twitter handle IceUniverse on Twitter unveiled that the upcoming phone will use a curved OLED display panel. The panel is likely to be manufactured by China’s BOE or South Korea’s LG Display. The display panel is also said to have a notch over a hole. In addition to this Ben Geskin also posted a concept image of the phone. Let’s have a look at that. 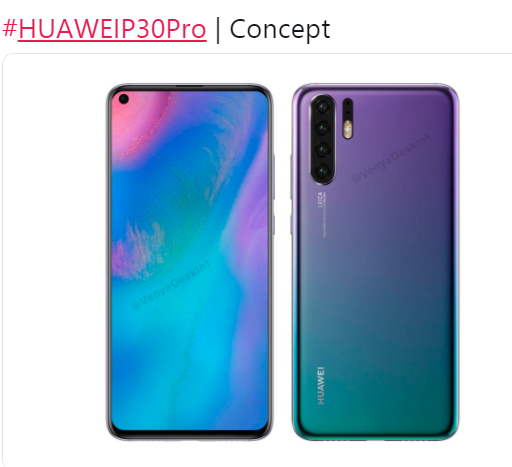 However, the company hasn’t yet made any confirmation whether the P30 Pro will sport a notch design or a display hole. We are still not sure any of these specs as it would be too early to say something right now. Hopefully, in the near future, some other reliable sources will come forward to share more about the handset. After that, we can have an idea about its specs and features.