Worldwide well known smartphones Chinese company Huawei launches another successor of P8 in the name of Huawei P8 LITE also called Alice. As P8 was the flagship device for Huawei, the trend might be changed with the release of P8 LITE as its a quick release after P8 with many smart features. The article “Huawei P8 LITE Review” is about the software, hardware, pros and cons, images, shape, bench-marking and much more.

P8 LITE has a super fast 1.2GHz Octa–core processor of 64 Bit type with HiSilicon Kirin620 chip-set. The chip-set is a branded processor of Huawei with 8 Cores and with GPU Controller of ARM MALI 450MP4. The display is 5″ with color IPS TFT Display and (720*1280) resolutions with up to 293.7 Density Pixels per Inch(DPI). The screen is protected with Corning Gorilla Glass 3 that has a shock absorbing capability and with a scratch proof ability. The GPU driver fully supports the colors by boosting them with pure and true colors over the screen.

The memory section consists of 2GB RAM (Version DDR-3) and 16GB ROM (SAMSUNG manufactured builtin) with support up to 128 GB with a memory stick that can be inserted along with the SIM-2 in the SIM-2 jack.

Better devices do need better cameras both for taking HD Videos and Snaps and for taking selfies. The rear camera is 13MP autofocus that captures 4160*3120 pixels snaps, the camera has also has features like Geo-tagging, touch focus, face and smile detection, panarama and HDR. Captures video in high definition 1080p with 30 frames per second. 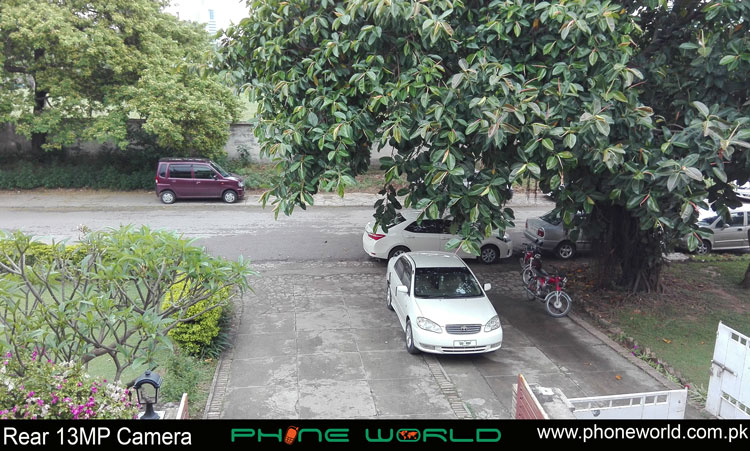 The Front camera is 5 MP with features like beauty mode, normal mode and others. Takes snaps up to (2592*1456) pixels and up to a size of about 1.5MB to 2MB depending upon the colors and light of the area. 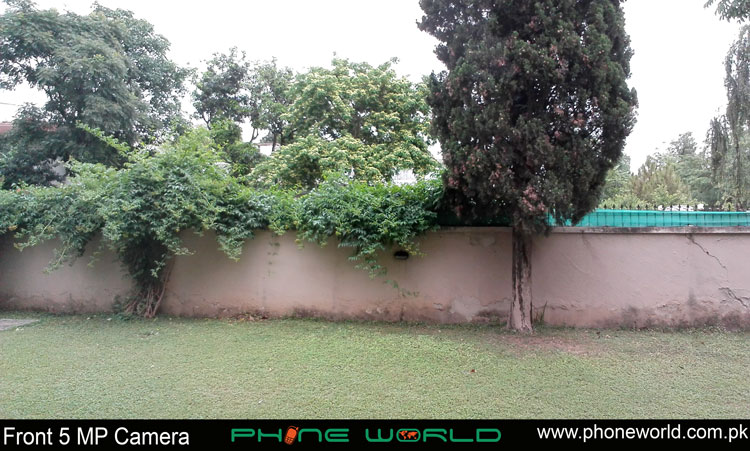 The dimensions of the device are (70.6*143*7.6)mm that guarantees the high-end gadgets packed in the module with perfection. Slim and smooth shape from both sides, the device lays flat over the flat surface kept upon. The rear side is nicely patterned with wooden shaped lines that looks real nice. The weight of P8 LITE is 132 grams that is normal, neither too heavy nor very light.

The box contains a 1amp charger along with a USB Cable that can be used both for transferring data and to charge your P8 LITE. The branded earphones are tested that works fine with its DTS volume system and have clear cut variations in bass and treble. A SIM pin to remove the SIM jacks for inserting SIM and memory card. A manual is also included in the box to give you an easy go through with the precautions and ways to use your Huawei P8 LITE (Alice) if you are a newbie.

Huawei P8 LITE is a 4th generation smartphone that supports all kinds of data including the GSM / HSPA and 4G LTE.

Below three images have been taken from different angles revealing the 3.5 mm jack port, the USB cable port and the speakers. The speakers have been introduced at the bottom that won’t decrease the volume like other smartphones. When you keep them in the bed, the speakers are at the back side that are closed while you keep the phone on a flat surface.

P8 LITE/Alice is loaded with Android OS (5.0.2) Lillipop that is the latest OS uptil now that enhances the P8 LITE(also called Alice) with different features like the first image below shows the lock screen interface with aroused menu that comes when you swap your thumbs upside. Second and third snapshot shows the general interface for P8 LITE.

P8 LITE is fitted with a Li-ion Polymer battery which is non-removable, non-replaceable with a capacity of 2200mAh. The battery size has been reduced as it was 2680mAh in the before launched smartphone P8. The snapshots below shows the different aspects of the battery, its consumption and the approximate duration left for the battery backup. The third and the last snapshot shows the storage memory, its total size, occupied size and space left.

The actual fun is in the bench-mark of a smartphone. As P8 LITE consists of an Octacore processor along with 2GB RAM and 16 GB ROM. The device has to be bench marked to check for the real worth of that phone. P8 LITE has been checked with different applications and games to figure out the performance of the device in Huawei P8 LITE Review.

As Huawei P8 LITE is a Mid-end smartphone with Mid-end features and hardware. The device has to take(expected to take) points greater than 32,000 over the Antutu’s bench mark. Consult the snapshots below to check for the points in the first snap, CPU Information at the second snap, Position of P8 LITE internationally at the third snap and phone details at the last snapshot.

CPU-Z is another free application that shows you the CPU, System, battery, temperature, and sensors information. First snap shows that P8 LITE has ARM Cortex-A53 1.20 GHz processor with 8 cores. Each core fluctuates in between 200~1200 MHz frequency. Snap 2 shows the system information. Snap 3 shows the embedded sensors in the device along with its results at any direction. The last snap shows the battery health, level, source, status, temperature, technology used in the battery and output voltage for the smartphone.

The un-biased application Vellamo shows the status of Single core, multi-core and browser’s performance in a single go. After it gives each module its obtained score, the score is then uploaded to the server for bench-marking them with some standard smartphone worldwide and shows you the results graphically. You can expect better results from a smartphone with better specs. The results are shown in the snapshots below.

Comparing the efficiency of Huawei P8 LITE with LGE Nexus 4:

Comparing our P8 LITE with an international brand LGE Nexus 4, the following results are obtained in the snaps. P8 LITE is better in almost all the tracks but the browser.

GPU Bench mark is an application that checks the performance of Graphical Processing Unit and shows both the overall score along with the screen resolution normalized score, as shown in the third snap below. The points were expected to be more but it didn’t get that much.

Checking our Huawei P8 LITE with four different games for its graphics and performance. The results were great, smooth and fast. 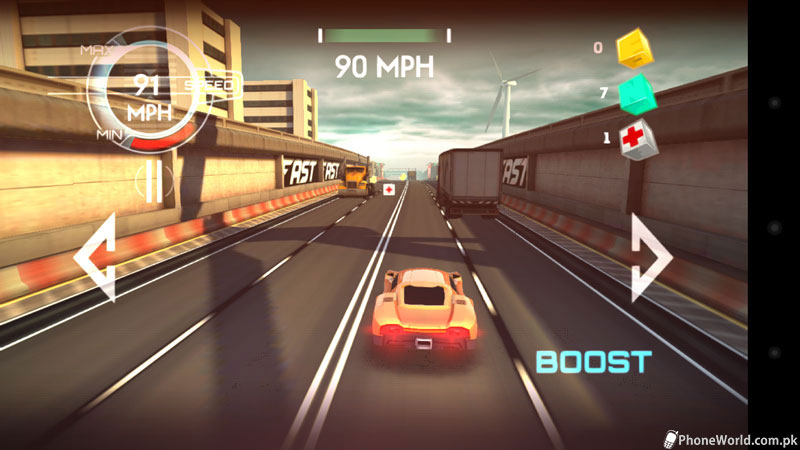 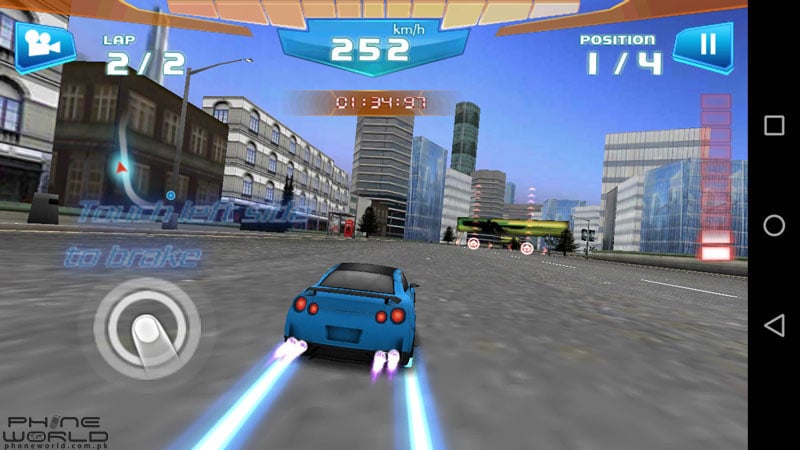 Huawei P8 LITE is a Mid-end smartphone with relative better specs. Having 5″ Color IPS TFT Display with (720*1280) pixels resolution with 293.7 DPI. The look has been perfect, as Huawei is an International brand, so it has to keep all its features and specifications up to a standard level. The graphics controller is ARM Mali 450MP4 which provides us with best results. As the device has its own branded Hi-Silicon Kirin 620 chip set with 1.2GHz as its speed and 64 Bit type. It takes the device to the top in the Mid-end category which is supported by 2GB RAM and 16GB ROM(SAMSUNG manufactured). The battery is Li-ion Polymer with Non-removable feature that goes perfect with the device as been tested in the review. The price of P8 is round about Rs:50,000/=. The price of P8 LITE may be about Rs:30,000/= or approximately $300 USD.