In the first quarter of 2015, Huawei has successfully raised its market share in the Chinese market. This was recently stated by GFK – a company engaged in authentic research surveys on the Chinese smart-phones retail market. Its latest report shows data, as of March 2015, where the market-share of the top three domestic smartphones, namely; Huawei, Apple and Samsung were discussed. 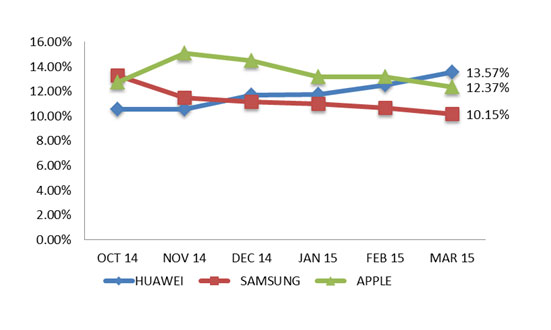 Huawei has now occupied the top spot in China for the first time, while the market shares of the other two competitors are showing a consistent decline in the Chinese market since November 2014. Whereby, Samsung’s market share dropped to third during March 2015.

Huawei accounted for 33% of the market-share. According to a recent Data disclosure of Huawei; More than 4 million units of Huawei Mate 7 flagship model were shipped over the past six months. This is a new world-record in the domestic, high-priced smart phone shipments.  The GFK statistical data, on the Chinese market in March, reflects that Huawei achieved a sales value of 6.535 billion yuan indicating the remarkable progress of Huawei in the Chinese market. The total market size of smart-phones in China during the first quarter of 2015 was 99 million dollars.