For several years the tech world is evolving to suffice the needs for end user requirements and briefly before such advents one would rarely use any mobile network due to limited and expensive packages. In short Tower PC/laptops were used for Skype with additional DSL connection transferring files or images but now they can perform the similar with their handsets using network data.  Similarly the Telecommunication Industry in Pakistan is also maintaining and improving a good influx of the subscribers. But the new laws governing the issuance of the SIM cards also known as the Biometric Verification may have reduced the subscribers. The BVS may sound a show stopper but in reality it has cleared the profits for the Operators and increased awareness among the users. Now the data consumed is actually used by bona fide citizens or registered foreigners in Pakistan.  Such subscriber awareness in terms of utilizing better data rates in their normal life have enabled them to understand the capabilities that can be supported by the Latest technologies that the Operators are acquiring. Such altogether attention by the users and the operators, which will mature further with time, has regained the lost numbers of subscribers for the 3G/4G operators. The number that fell due to the strict law is now rising with no impediment as now all the users are registered and are mostly focused to their serving operators.  The Technology will grow continuously to reach new heights enabling the users to manage their activities with their improved data usage.

Statistics for one month increase is under observation according to the PTA’s Analysis.

According to the PTA’s statistics, here are the details for 5 Pakistani 3G/4G operators. Namely Telenor, Ufone, Mobilink, Warid and Zong by August 2015. 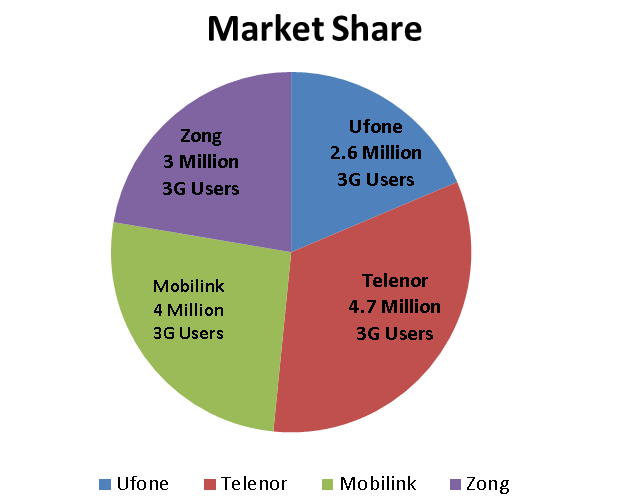 The growth of broadband subscriber gives positive impact on Pakistan’s Telecommunication industry in the world. If number of subscriber increases with the same rate as it is increasing i.e. 1.85% monthly since Jun 2015, there is a chance for Pakistan’s telecommunication industry to reach a 140M users by May 2016. Because in the year of 2015, the BVS was introduced which looks like it affected the subscriber volume. But in reality it has cleared the picture for the operators with real and faithful subscribers, who actually use the network while being registered to their old operators. There were many users with more than 5 SIM cards but they only used maximum three connections. The two extra or in many cases more than two were just occupied and would not be used. So by BVS these extra subscribers have mostly been filtered out to view the actual users actively on the network. This also improved the available MSISDN Pool for each operator. Since 3G is available and it is actively used, we can observe a good rise in the subscribers.

A Monthly Forecast Towards 140 Million Subscribers

If the growth of subscribers continues with the same rate then we are expecting to reach the 140Million users in May 2016. The following graph shows a linear rise, from Oct-15 to May-16 with green triangles, which is only for forecasting purposes that we have deduced from the past few months stats taking help from the PTA’s Official website . Please continue to view our monthly magazine and we can update the change in rise and update you accordingly. 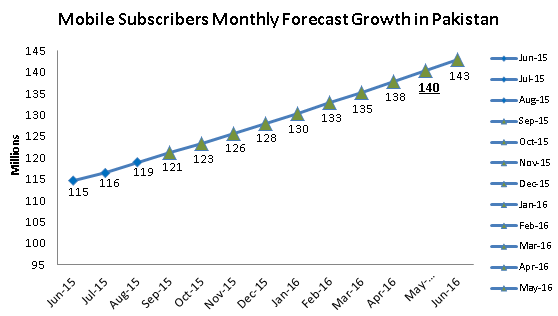