The most talked-about Motorolla device that is going to be powered by Snapdragon 8 Gen 1 chipset has finally appeared on the internet. Moto Edge X30 live image is made public by the company’s GM which shows that this upcoming flagship device from the company will include under display camera.

Chen Jin, Motorolla’s General Manager posted the image with the supporting content which proved that the device is going to house the under display camera:

There is no doubt that the under-screen camera is still a radical choice for the industry, but the crazy increase in user demand and feedback for this feature tells us to do the right thing, not the easy thing. So this time we decided to do whatever it takes, there will be a special version of #motoedgeX30, which will be the first under-screen front camera of the Snapdragon 8 [Gen1] platform, and the first 60 [MP] front camera will never shrink. Double surprise, please wait for December 9th.

This was the image that was posted: 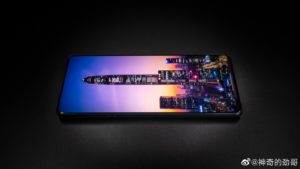 The company’s official account on Weibo also came up with the teaser of Moto Edge X30 just after the above image was posted. The post was also shared in reference to the under-display camera included in the device.

Can hide the focus, can’t hide the stunning. #MotoEdgeX30 Beauty selfie with front 60MP screen. When you look back at the previous selfies, you will find that beauty has always stayed on your face and never left. There are 2 days before #MotoEdgeX30 new product launch event on December 9.” – Machine translated 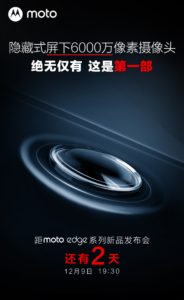 Chen also mentioned that only the special version of the phone will include this under-display camera so we are not sure which version will have it. For now, we know that the device will be powered by Qualcomm’s newly announced 4nm Snapdragon 8 Gen 1. According to the leaks, the device will have a 6.67-inch FullHD + display having a 144Hz refresh rate, HDR10+ support, and DCI-P3. Other than this, the device will have two main 50MP cameras (wide + ultrawide), and a 2MP depth sensor.