A lot of information about Samsung Galaxy z Fold3 is circulating on the internet. While we have an idea that the device will have an under-display camera inside and a folding screen, the new official renders of Samsung Galaxy Z Fold3 tell another story showing a hole-punch selfie camera in the same area as that of ZFold2.

The renders show that S-Pen supports n Fold3. It is said that it is a special S-Pen as one of the images has “Fold Edition laser” words written on it. 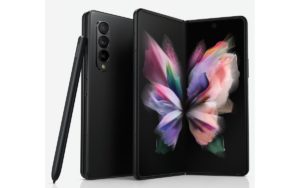 The image above also confirms the fact that the Fold3 will have S Pen support, though it may be a special S Pen since the one in the picture has the words Fold Edition laser-etched onto it. The device features a triple rear camera array which is not very pleasing to see as none of these shooters is periscope so it means that Samsung has not brought any changes to the last year’s folding device, Fold 2.

The folding device is thinner as compared to Fold2 when it is n the folding position. In the renders, we cannot see whether there is a screen gap or not. In the image below Fold3 is placed next to Galaxy Z Flip3. Since it seems like an official promo from the company, the name flip3 is official.  Samsung is experimenting with its foldable lineup till now and in years to come, it will be launching the flip generations. 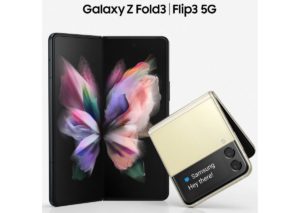 Z Flip3 is a comparatively smaller foldable device having a dual-tone design, dual camera, and a giant outer screen. The device features a metal frame with glass bits on the top. It is expected that the teased Z Filp3 and Z Flip fold3 will go official in the Unpacked event, that will be held in August.